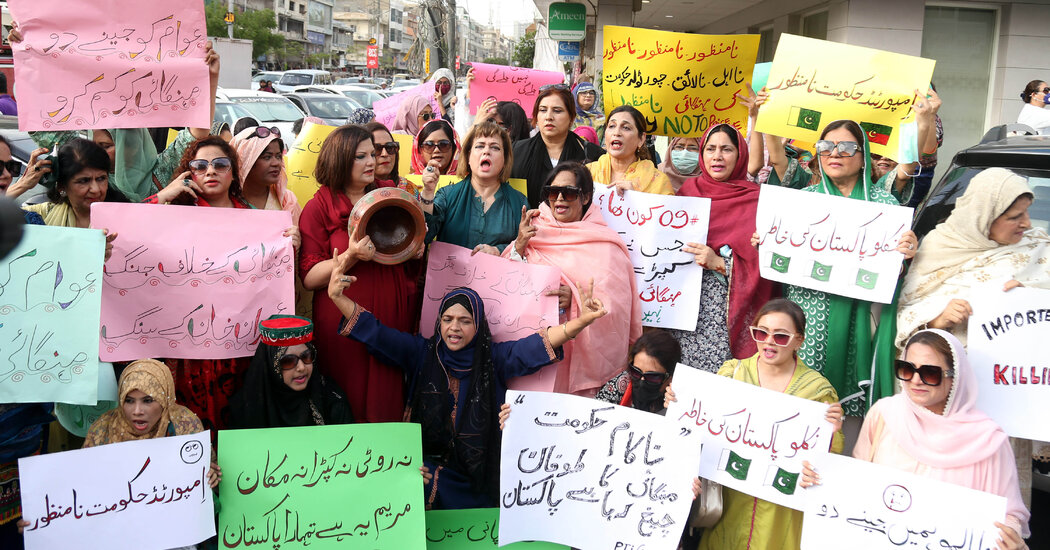 
ISLAMABAD, Pakistan — The International Monetary Fund said it had reached a staff-level agreement with the Pakistani government for the revival of a bailout program, providing a welcome reprieve to the country as it struggles with a cratering economy, depreciating currency, high inflation and political instability.

If it is approved by the monetary fund board, the agreement — announced by the fund late Wednesday Eastern time — would pave the way for the disbursement of $1.17 billion. It could also unlock more funding for Pakistan, which in recent weeks has neared the brink of a balance of payments crisis.

“The announcement by the I.M.F. will prove to be a much-needed shot in the arm for Pakistan’s ailing economy,” said Aqdas Afzal, a Karachi-based analyst and assistant professor of economics at Habib University, who added that the sharp increase in energy prices after the invasion of Ukraine and rising commodity prices more generally had not helped.

Reviving the loan program and getting the economy back on track have been a political litmus test for Pakistan’s new prime minister, Shehbaz Sharif, who took over in April after his predecessor, Imran Khan, was ousted in a no-confidence vote.

For months, the fund and Mr. Sharif’s government have hit a deadlock in discussions over the terms of reviving the bailout, which was announced in 2019 and later suspended after Pakistan’s previous government failed to meet some of the loan conditions, like cutting energy subsidies.

Like his predecessor, Mr. Sharif had been reluctant to enact some of the fund’s key demands, fearing public backlash that could hurt his party’s chance of success in the next general elections.

Those elections are scheduled for next year, but the new government has come under increasing public pressure from Mr. Khan and his supporters to hold them earlier.

“The fund demanded progress toward improved public finances, which the new government was reluctant to implement straight away since implementing higher taxes could politically backfire,” said Mr. Afzal, the analyst.

But with its foreign currency reserves falling dangerously low in recent weeks, Mr. Sharif’s government relented and introduced a series of tough economic measures to meet the I.M.F. demands. These measures, which included raising electricity rates, increasing fuel prices and ending government subsidies, have resulted in the expected backlash.

Fuel prices have increased substantially in the past two months, leading to a loud public outcry and harsh criticism from Mr. Khan, the former prime minister.

Feroz Ahmed, who has a grocery store in Karachi, said higher prices on gasoline and other essential goods had made life hard for ordinary Pakistanis.

He said that in recent months, prices of virtually everything — flour, cooking oil and rice; electricity, gas and petrol — have soared while salaries have either remained the same or been cut.

“People who used to buy one kilogram of essential items, such as pulses and sugar, are now increasingly buying 125 or 250 grams because their purchasing power has been eroded badly,” he said. “Many shopkeepers in recent months ended their businesses and rented their shops because the inflation has affected traders, too.”

Akram Shah, a rickshaw driver in Karachi, said the rise in fuel cost had hurt his income.

“People cannot afford to go to work by their own cars or use rickshaws or Uber, and started using public transport,” Mr. Shah said. “Now, it is difficult for me to pay rent of my house, school fees for two children and buy food for them.”

Mr. Sharif has defended the economic measures as a necessary hardship to steer the country’s faltering economy in the right direction.

“The Agreement with the Fund has set the stage to bring country out of economic difficulties,” Mr. Sharif wrote on Twitter on Thursday.

The I.M.F. also outlined several policy priorities for the Pakistani government. These include cutting government spending, increasing tax revenue and keeping inflation — which exceeded 20 percent in June compared with the same period a year earlier — in check.

Analysts said that reviving the loan program would increase international confidence about the country’s economic future.

“The I.M.F. agreement will open up additional sources of funding for Pakistan, as it will be taken as a signal by many bilateral donors and friendly countries that Pakistan’s economy has now stabilized,” Mr. Afzal said. “With I.M.F.’s assistance and with the international oil prices coming down, Pakistan seems to have averted a major economic crisis.”