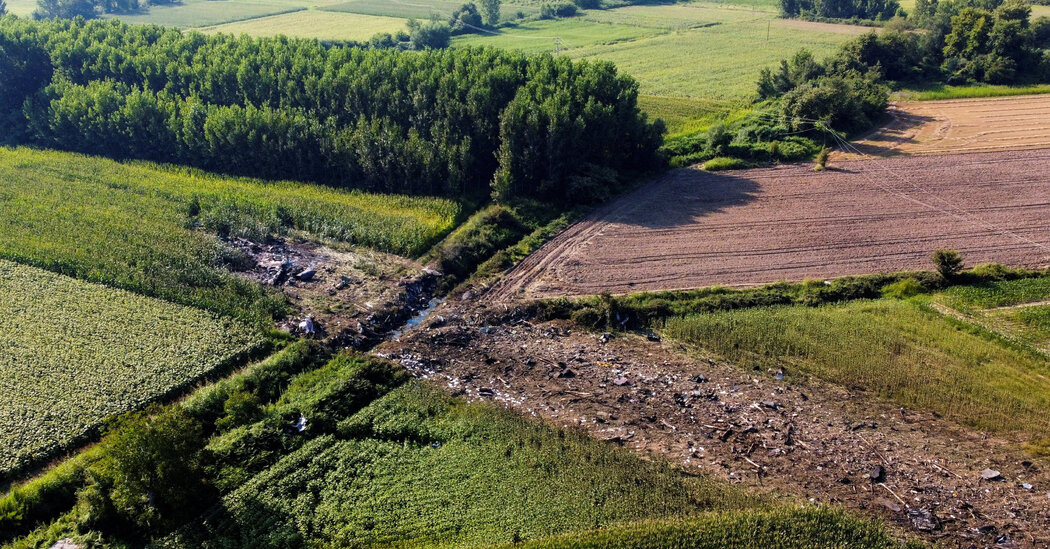 
ATHENS — A Ukrainian cargo plane carrying 11.5 tons of Serbian-made weapons destined for Bangladesh crashed in northern Greece late Saturday, killing eight Ukrainian crew members and setting off a sprawling investigation to determine if the hazardous material being transported posed a threat to the local population, state and local officials said.

The plane, an Antonov An-12BK, was owned by the Ukrainian cargo carrier, Meridian, but the incident did not appear to be connected to the ongoing war in Ukraine, according to Serbian and Ukrainian officials.

The cargo plane was on its way from Serbia to Jordan — the first of several planned stops, according to flight records — when its pilot contacted Greek authorities before midnight on Saturday reporting engine problems and requested permission to make an emergency landing, according to an official with the Greek Civil Aviation Authority, who asked not to be identified because they were not authorized to speak publicly. The plane crashed at around 11 p.m. local time in a cornfield approximately 40 miles west of the city of Kavala, the official said.

A spokesman for Greece’s national fire service, Yiannis Artopios, said firefighters have found two bodies and are seeking six others.

Serbia’s defense minister, Nebojsa Stefanovic, said that the plane was carrying weapons produced by the private Serbian arms manufacturer, Valir, including illuminating mortar rounds and mines. He told reporters that the weapons shipment had been agreed with Bangladesh’s defense ministry “in accordance with international rules,” according to Serbia’s public broadcaster RTS.

Stamatis Kourtesis, who owns a street kiosk in Antifilippi, the closest village to the site of the crash, said he saw the burning aircraft careen through the night sky before crashing in a fiery explosion.

“My throat was burning and, from the noise, I thought it was a helicopter at first,” he said.

“Then we turned round and saw a light, it was the burning aircraft,” he told the Athens-Macedonia news agency, saying the initial explosion left a “mushroom of smoke.” Vadim Sabluk, a Ukrainian official who visited the site of the crash on Sunday, confirmed that the eight crew members on board were Ukrainian nationals, Greek state television reported.

Greek firefighters sent to the scene of the crash on Saturday night were unable to access the area because of the thick plumes of smoke and an acrid stench that authorities feared could be toxic.

“We did what we could from a distance but it was impossible to get close due to the intense heat, smoke and the constant explosions,” said Rafaela Tzima, a spokeswoman for Greece’s fire service.

Greece’s Civil Protection Authority issued a statement on Sunday urging residents of villages in the region to remain at home with their windows closed until further notice. One local mayor called for a curfew until the findings of the investigations have been revealed.

Drone footage captured on Sunday and aired on Greek television showed what appeared to be artillery shells and debris strewn across a field of corn.

“We know it was carrying explosives, drone footage showed shells, what we don’t know is exactly how dangerous the cargo was,” the president of Greece’s Air Accident Investigation and Aviation Safety Board, Ioannis Kondylis, said on Sunday.

His team was waiting for Greece’s military to grant access to the site of the crash, he said, adding that given the hazardous nature of the cargo, the investigation would likely take time.

“The first step is to determine what was released into the air by that explosion,” said Konstantinos Syrlantzis, spokesman for Hellenic National Defense General Staff, known by its acronym, Geetha.

Experts from Geetha’s land mine disposal team and its special unit for nuclear, chemical and biological weapons were working to identify a suspicious white powder that had settled in and around the sight of the crash, Mr. Syrlantzis said.