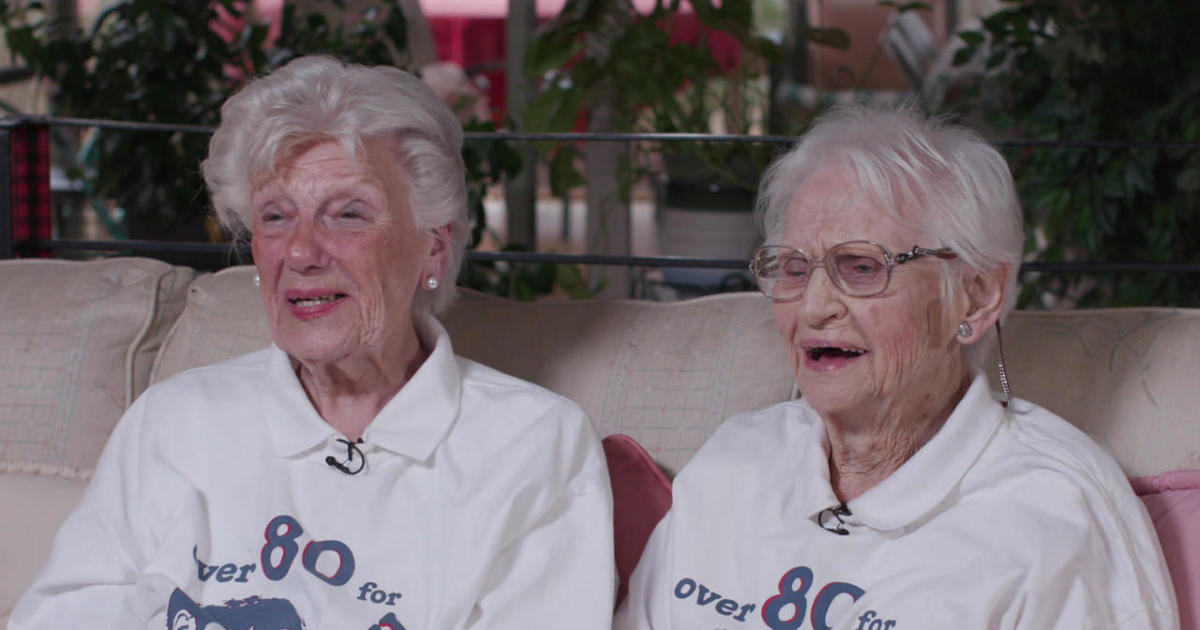 
For a month of Sundays … years of Sundays, in fact … the New England Patriots have had a loyal cheering squad older than the team itself. “I do my arms, wave, Hallelujah! Hallelujah!” said 94-year-old Betty Pensavalle. “Yeah, you have to do something. Keeps me awake, too!”

She doesn’t only have a thing for football; she’s got a real thing for former Patriot quarterback Tom Brady. “Handsome,” she said. “Adorable. Gorgeous.”

Her best friend, 95-year-old Elaine St. Martin, carries a bit of a Brady torch, too: “Yeah, he was really handsome.”

Things got contentious when Brady left the Patriots for Tampa Bay. “I was angry with him; I wanted to kill him for leaving us,” said St. Martin.

They both forgave Tommy (as they call him). That’s the nature of their friendship – it’s been as tight as the laces on a football for more than 70 years. “We talk on the phone every day,” said St. Martin. “Even if we just called to say, ‘Are you all right?’ That’s it.”

Football was family fun, until they became widows, and then game days became the link that kept their friendship from fumbling. Every game they made sure no one was alone at kickoff. “One Sunday here, one Sunday at my house, and it would go right to the five of us,” said St. Martin.

Betty and Elaine, along with three other friends, Anita, Pat and Claire, gathered so regularly, they got a nickname: The “Over 80 for Brady” club. Betty’s grandson even made them matching shirts. “I sometimes didn’t put it over my head, I’d hold it on me – I didn’t want to spoil my hair,” admitted St. Martin.

Pensavalle remembered, “Pat would let out screams every time somebody fumbled and did something wrong. And Clare would say, ‘Pat, please, not so loud. Not so loud!’ A little cussing went on, too! Not us. We were the ladies of the group!”

But here’s where things get about as exciting as Brady trailing in overtime. Pensavalle’s grandson, Max, who works in Hollywood, threw a Hail Mary, pitching a movie about the Brady Ladies – and guess who jumped in with both feet? Tom Brady himself.

He sent a personal message to Pensavalle: “I wanna make a movie based on your Over 80 for Brady crew.”

No grandson could have done more. “Oh my God, Max! How did you do that?” she exclaimed. “Is that really him, or an imitation?”

In “80 for Brady,” out next month, this fearsome foursome tries to do what the real Brady Ladies never did: get to the biggest game of them all, the Super Bowl.

There’s no shortage of age jokes, or spicy ones. Tom Brady bravely plays himself, as does fellow teammate Rob Gronkowski.

Moreno said, “We had this wonderful locker room scene, and I’ll tell you, you know, I’m 91, but you know I walked into the damn room, and I got turned on!”

“She doesn’t like it when I talk about my sexuality.”

If their friendship seems especially familiar, it may be because they all rose to fame during the same era.

In the 1960s Rita Moreno was starring in “West Side Story”; Lily Tomlin was creating unforgettable characters on “Rowan & Martin’s Laugh-In”; Jane Fonda was baring it all in “Barbarella”; and Sally Field was heavenly in “The Flying Nun.”

Tomlin admitted, “I wanted the Flying Nun part! I did!”

“But you wanted Barbarella, too, you told me!” said Fonda.

“No, no, I wanted the Flying Nun, and I’d never even heard of Barbarella.”

Moreno said, “I remember Sally in a film called ‘Sybil.'”

Tomlin said, “I don’t really like people that much. I try to avoid them.”

“But those who are intentional …” said Tomlin.

“You just can’t get away from them!” Field added.

But Fonda said there’s a caveat: “Women’s friendships are very different than men’s friendships. They’re very important to our health. Because [men] kind of sit side-by-side and watch sports or cars or women. Women sit facing each other, eye-to-eye, and they say, I’m in trouble, I need you, can you help me. You know, we’re not afraid of being vulnerable.”

“Actually I do trust you,” Moreno said to Tomlin and Fonda. “You, I’m not so sure!”

Between the four of them, they have enough Emmys and Golden Globes to fill a stadium, as well as five Oscars, three Tonys, and a pair of Grammys, too.

Fonda said, “I don’t know about all of you, but it never to me feels, like, Oh, this is easy. You know, we could just show up and – not once in my whole life has it felt like that.”

“It was fun to be with all of you, and to just laugh and everything,” said Field. “But in reality, it was hard work. There was a lot of physicality.”

For Betty Pensavalle and Elaine St. Martin, it’s all a bit overwhelming – first Tom Brady, then their own private movie premiere. The only thing missing was the red carpet, and one other thing: No Tom Brady at the screening.

Sadly, the Over 80 for Brady club has dwindled to two. Claire passed away, and Anita and Pat are in an assisted living facility. But Betty and Elaine’s devotion to their team – and each other – is strong enough for all of them.

St. Martin added, “It’s all about friendship, and don’t get into arguments with people. Life’s too short to not get along.”

The only way this football fairy tale could get any better, they say, is to have just one more wish fulfilled: to see Tom Brady in person. “I hope we see him before we die!” St. Martin said.

“They better hurry up!” Pensavalle laughed.

To watch a trailer for “80 for Brady” click on the video player below: