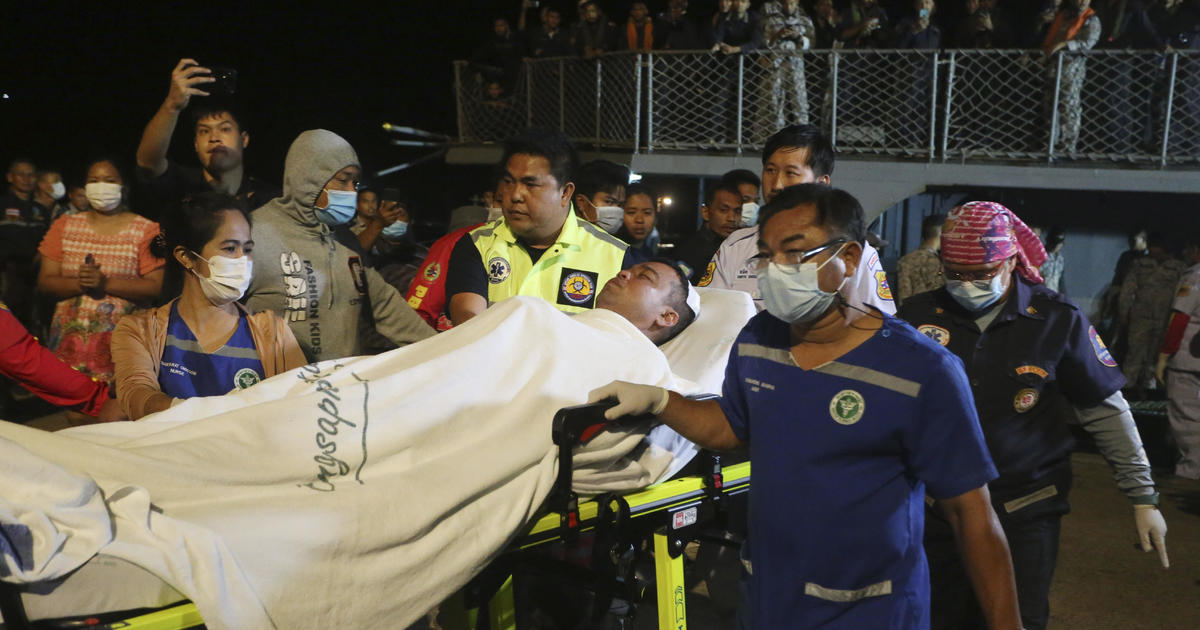 
Prachuap Khiri Khan, Thailand —  One sailor was found alive Tuesday in the Gulf of Thailand after two nights at sea following the sinking of a naval vessel, giving some hope to the families of over two dozen still missing, but the bodies of four sailors were found as well, officials said.

In all, 76 sailors from the HTMS Sukhothai have been hauled from the sea alive after the vessel went down late Sunday roughly 22 miles off the country’s southeastern coast.

“I believe that this is good news that we could find more people,” he said, adding that Chananyu was being cared for onboard the HTMS Angthong.

Earlier, another naval officer, Narong Khumburi, expressed hope that survivors would be discovered since they have “life vests.”

“But I imagine they must be exhausted,” he added.

Efforts to find the missing crew were focused on aerial searches, with the Royal Thai air force assisting the operation, which has been affected by strong winds.

At the pier in Prachuap Khiri Khan province, anxious families of those missing gathered to wait for news.

Siri Esa, the mother of 21-year-old Saharat Esa, who was onboard, smiled when she heard about the latest rescue.

“I also have faith in my son. This is good news,” she said.

Waves were still high Tuesday, navy spokesperson Admiral Pogkrong Montradpalin said, noting the search area had grown and was focused “on the area near shores, according to the currents and the wind.”

Naval commander Pichai, speaking at the same pier, said that he remained confident. “We have full hope,” he said.

Sahachart Limcharoenphakdee, a member of the National Institute for Emergency Medicine, said they were working with naval personnel to care for those plucked from the water.

“I am hopeful, and have trust for the navy rescue team, who are skillful,” he said.

Local doctors have done health checks on those rescued earlier, with some moved to hospitals.

Some “suffered from broken bones in the upper arm and fingers,” Wara Selawattanakul, a doctor with the provincial health department said.

“I thought it would be fine and nothing bad would happen from the storm,” she said, adding that before he went on the ship her son asked her to care for his wife. “I would like to hug him,” she said.

The vessel — a corvette, the smallest type of military warship — is believed to have run into trouble after its electronics system was damaged, according to the navy.

Parts of southern Thailand have been hit by storms and flooding in recent days.

A warning from the Thai meteorological office remained in place Tuesday, with strong winds causing rough conditions in the Gulf of Thailand. Seafarers were cautioned to be careful and small boats were advised to stay ashore.

The HTMS Sukhothai was commissioned in 1987 and built in the United States by the now-defunct Tacoma Boatbuilding Company, according to the U.S. Naval Institute.