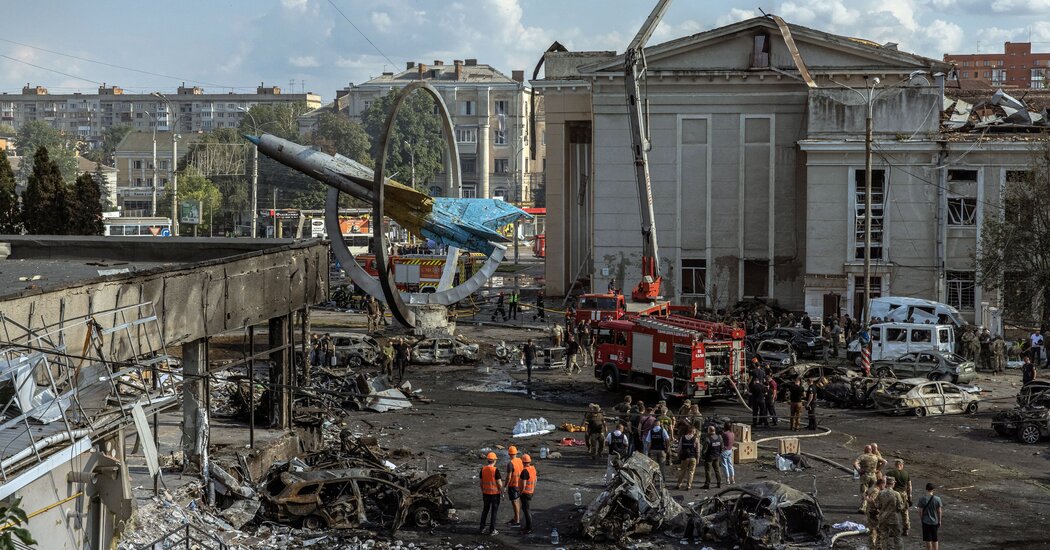 
VINNYTSIA, Ukraine — A volley of missiles hit a shopping center, a dance studio and a wedding hall in central Ukraine on Thursday, killing at least 23 people and setting off a frantic search for dozens more missing in the rubble, in the latest strike to hit civilian targets far from the front line.

Seventy-one people, including three children, were hospitalized after three missiles hit the center of Vinnytsia, a typically sleepy provincial capital, leaving behind a harrowing scene of smoking ruins.

The attack used cruise missiles fired by a Russian submarine in the Black Sea, President Volodymyr Zelensky’s office said. It said three children were among those killed in the strike on Vinnytsia, about 240 miles inland from the coast.

“Every day, Russia destroys the civilian population, kills Ukrainian children, directs rockets at civilian objects,” Mr. Zelensky said. “What is this, if not an open act of terrorism?”

Grooms once carried their brides from the wedding hall, a well-known local landmark, and a building next door once drew children to a photo studio producing school albums. The missiles hit a military officers’ club, a potential target, though one in a densely built-up central neighborhood of the city.

Even hours later, as firefighters doused the smoldering husks of overturned cars with water, bystanders looked on in shock. The Ukrainian State Emergency Service said 29 people remained unaccounted for, and a search effort was underway in the rubble in a part of town where people run errands.

Russia has paused its drive to conquer territory in eastern Ukraine as it regroups battered military units, but Moscow has served up daily reminders that its arsenal of long-range weapons can inflict death and destruction far from the battlefield, against civilian and military targets alike.

The Russian Defense Ministry, which has repeatedly denied targeting civilians, has not commented on the Vinnytsia strike.

Ukraine’s foreign minister, Dmytro Kuleba, denounced the Kremlin for the attack, which occurred as the Dutch government hosted a conference at The Hague intended to ensure that Russia would be held accountable for human rights violations in Ukraine.

Even as the international community was gathering, Mr. Kuleba said, “Russia is committing another war crime.”

On the eve of the conference, the United States called on Russia to immediately stop the forced deportation of Ukrainians to Russian-controlled territory. Secretary of State Antony J. Blinken said on Wednesday that the Russian authorities had  “interrogated,  detained, and forcibly deported” between 900,000 and 1.6 million Ukrainian citizens, including 260,000 children, often to isolated regions in the Far East.

Mr. Blinken described the transfers as a breach of international law and “a war crime.” Testimonies given to The New York Times and other news outlets by deportees who escaped Russia have included accounts of interrogations, beatings and torture of those deemed to have ties to Ukraine’s armed forces.

Russia has acknowledged that 1.5 million Ukrainians are now in territory it controls, but has asserted that they were evacuated for their own safety.

Just before the strike in Vinnytsia, about 200 marriages and birth registrations had been planned, Vasyl Kavatsiuk, a regional justice ministry official, said in an interview in the damaged wedding hall, where the floor was covered in glass shards. Couples at the hall had evacuated before the strike when an air raid siren sounded.

Later on Thursday, workers carried out boxes of documents and computers to save what records they could.

The strike rattled nerves in a city that had been returning to some sense of normalcy. The area had not seen significant attacks since early March, days after the Russian invasion, when cruise missiles struck an airport in the city.

“Recently I brought my children back and now I don’t know what to do,” said Vadym Labun, 34, an emergency service worker, who had relocated his family to a village outside the city earlier in the war. “I still haven’t spoken with my wife.”

The strike was all the more shocking for destroying the shopping center that had been frequented by locals for decades. Cobblers repaired shoes at stands. Generations of teenagers had their ears pierced at an earring shop in the now-destroyed building.

The explosions shattered windows in shops and buildings for hundreds of yards around. A worker, who offered only his first name, Serhiy, out of concern for his security, was packing boxes from a shop that sold tea and coffee.

“We will rebuild it,” he said. “We are not going anywhere.”

The missiles damaged about 55 buildings and 40 cars, Viktor Vitovetsky, an emergency service official, said at a briefing on Thursday. More than 69 emergency workers were helping to clear the rubble and search for survivors, he said.

After the explosions, frightened residents stood on the sidewalks, watching a coiling plume of black smoke rise from the city center.

“I had no time to get scared because it was a sudden loud noise and a window in my room was blown off,” said Raisa Ludanova, a witness.

Vinnytsia, which had a prewar population of more than 370,000, lies west of the Dnipro River, hundreds of miles from the Donbas region of eastern Ukraine, the focus of Moscow’s military campaign in recent weeks and the presumed target of its next ground offensive.

The strike came amid other recent attacks on populated civilian areas.

A Russian missile devastated a ceramics factory in the city of Sloviansk, in the eastern Donetsk Province, a regional official said late Wednesday. No casualties were immediately reported in the strike on the factory, which employed 270 people before the war, according to its website.

“The Russians are destroying our industrial potential,” said the regional military administrator, Pavlo Kyrylenko, calling the strike a “serious blow to the economy of the region.”

There was no immediate comment from Moscow on that attack.

In Bakhmut, a town in Donetsk that is an important stronghold for the Ukrainian military and a strategic target for Russian forces, both armies traded artillery fire for much of the day on Wednesday.

The town, with leafy streets and brick apartment buildings, had 100,000 residents before the invasion but now looks increasingly like a war zone, with large gashes torn through apartment complexes and wide craters in the ground.

On Tuesday evening, rockets smashed into several houses and damaged a school in Bakhmut. One person died and five others were wounded, the police said.

In the southern port city of Mykolaiv, five civilians died in a Russian strike on a hotel, Kyrylo Tymoshenko, the deputy head of the president’s office, said on Thursday.

And in the eastern village of Chasiv Yar, in Donetsk, the State Emergency Service said the death toll from a strike on an apartment complex over the weekend had risen to 48, making it one of the deadliest attacks since the war began.

In June, a missile struck the Amstor shopping complex in Kremenchuk, a town south of Kyiv on the Dnipro River, killing 18 people. A nearby factory was a potential military target. And in April, a missile hit a railroad station in Kramatorsk, killing 59 people, including seven children, and wounding 100 others.

Some military analysts have said such strikes suggest that Russia is running low on precision weaponry and is resorting to less accurate rockets and missiles, or is firing haphazardly at targets, regardless of the collateral deaths. Others see the civilian casualties as part of an intentional campaign of brutality to break Ukraine’s will to resist.

A British military intelligence report on Thursday said Russia’s forces had “achieved no significant territorial advances over the last 72 hours” and that its ground troops were mainly focused on conducting small “probing assaults,” which are designed to test Ukrainian defenses.