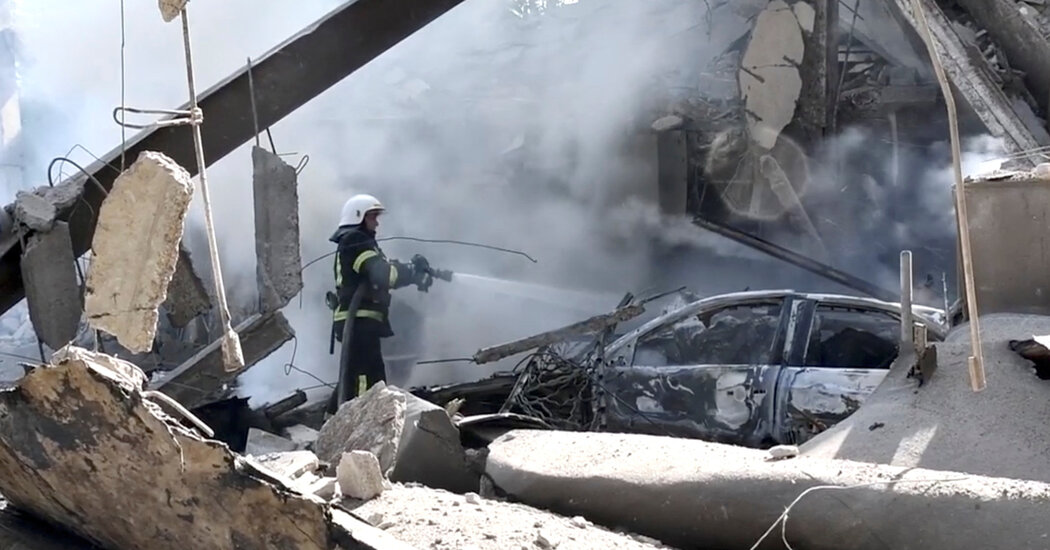 
At least 10 Russian missiles slammed into Mykolaiv, local officials said on Friday, hitting two universities, a hotel and a mall in the center of the southern Ukrainian city, which has been in Moscow’s cross hairs since President Vladimir V. Putin’s forces invaded in February.

At least two people were injured in the strikes, the mayor of Mykolaiv, Oleksandr Sienkevych, said in a post on the Telegram messaging app.

The head of the regional military administration, Vitaliy Kim, posted video that he said was of the strikes, showing dark palls of smoke rising above the city. “Now they attack our education,” he said. The strike took place at 7:50 a.m., he said, adding that the Russians knew “full well that there were already many people on the streets at that time.”

Russia’s Defense Ministry did not immediately comment on the strike in Mykolaiv.

The attack appeared to follow a pattern of strikes by Russian forces on civilian targets and infrastructure, including in areas that are not directly on the frontlines. On Thursday, a Russian missile strike on the central city of Vinnytsia killed at least 23 people, including three children.

Ukraine’s prime minister, Denys Shmyhal, on Friday called the attacks “cynical and brutal,” saying that Russia “should be recognized as a terrorist state.”

While Vinnytsia had been largely safe from attacks before Thursday’s strike, Mykolaiv has been under assault since the war began in late February due to its strategic location. It lies on a river that drains into the Black Sea, where Russia has established naval dominance, and it sits just west of the city of Kherson, which Russia controls. Control of Mykolaiv is also seen as essential for any potential Russian attack on the Ukrainian port city of Odesa.

Mykolaiv was a major hub for shipbuilding in the Soviet era and Mr. Sienkevych said that one of the universities struck in the missile attack was dedicated to the trade.

Last month, Mr. Sienkevych said that Mykolaiv was being shelled every day and urged civilians to leave. About 230,000 people remain in the city, less than half of its peacetime population, he said, most of them older residents and those who have health conditions that make travel difficult.