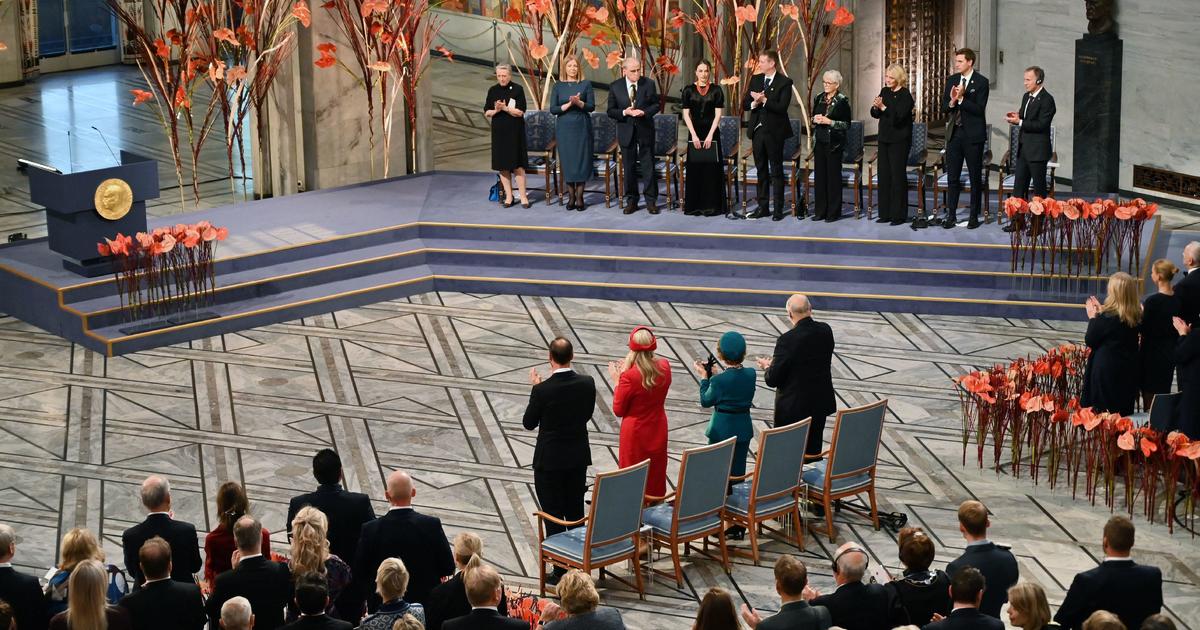 
The winners of this year’s Nobel Peace Prize from Belarus, Russia and Ukraine shared their visions of a fairer world and denounced Russian President Vladimir Putin’s war in Ukraine during Saturday’s award ceremony in the Norwegian capital.

In October, Oleksandra Matviichuk of Ukraine’s Center for Civil Liberties was named a co-winner of the 2022 peace prize, along with Russian human rights group Memorial, and Ales Bialiatski, head of the Belarusian rights group Viasna.

Matviichuk Saturday dismissed calls for a political compromise that would allow Russia to retain some of the illegally annexed Ukrainian territories, saying that “fighting for peace does not mean yielding to pressure of the aggressor, it means protecting people from its cruelty.”

“Peace cannot be reached by a country under attack laying down its arms,” she said, her voice trembling with emotion. “This would not be peace, but occupation.”

Matviichuk repeated her earlier call for Putin — and Belarus’ authoritarian President Alexander Lukashenko, who provided his country’s territory for Russian troops to invade Ukraine — to face an international tribunal.

“We have to prove that the rule of law does work, and justice does exist, even if they are delayed,” she said.

Bialiatski, who is jailed in Belarus pending his trial and faces a prison sentence of up to 12 years, wasn’t allowed to send his speech. He shared a few thoughts when he met in jail with his wife, Natallia Pinchuk, who spoke on his behalf at the award ceremony.

“In my homeland, the entirety of Belarus is in a prison,” Bialiatski said in the remarks delivered by Pinchuk — in reference to a sweeping crackdown on the opposition after massive protests against an August 2020 fraud-tainted vote that Lukashenko used to extend his rule. “This award belongs to all my human rights defender friends, all civic activists, tens of thousands of Belarusians who have gone through beatings, torture, arrests, prison.”

Bialiatski is the fourth person in the 121-year history of the Nobel Prizes to receive the award while in prison or detention.

In the remarks delivered by his wife, he cast Lukashenko as a tool of Putin, saying the Russian leader is seeking to establish his domination across the ex-Soviet lands.

“I know exactly what kind of Ukraine would suit Russia and Putin — a dependent dictatorship,” he said. “The same as today’s Belarus, where the voice of the oppressed people is ignored and disregarded.”

The triple peace prize award was seen as a strong rebuke to Putin, not only for his action in Ukraine but for the Kremlin’s crackdown on domestic opposition and its support for Lukashenko’s brutal repression of dissenters.

Russia’s Supreme Court shut down Memorial, one of Russia’s oldest and most prominent human rights organizations that was widely acclaimed for its studies of political repression in the Soviet Union, in December 2021.

Prior to that, the Russian government had declared the organization a “foreign agent” — a label that implies additional government scrutiny and carries strong pejorative connotations that can discredit the targeted organization.

Jan Rachinsky of Memorial said in his speech that “today’s sad state of civil society in Russia is a direct consequence of its unresolved past.”

He particularly denounced the Kremlin’s attempts to denigrate the history, statehood and independence of Ukraine and other ex-Soviet nations, saying that it “became the ideological justification for the insane and criminal war of aggression against Ukraine.”

“One of the first victims of this madness was the historical memory of Russia itself,” Rachinsky said. “Now, the Russian mass media refer to the unprovoked armed invasion of a neighboring country, the annexation of territories, terror against civilians in the occupied areas, and war crimes as justified by the need to fight fascism.”

While all the winners spoke in unison to condemn the war in Ukraine, there also were some marked differences.

Matviichuk specifically declared that “the Russian people will be responsible for this disgraceful page of their history and their desire to forcefully restore the former empire.”

Rachinsky described the Russian aggression against its neighbor as a “monstrous burden,” but strongly rejected the notion of “national guilt.”

“It is not worth talking about ‘national’ or any other collective guilt at all — the notion of collective guilt is abhorrent to fundamental human rights principles,” he said. “The joint work of the participants of our movement is based on a completely different ideological basis — on the understanding of civic responsibility for the past and for the present.”

Under the terms of Alfred Nobel’s will, the Nobel Peace Prize has been awarded by the Norwegian Nobel Committee since 1901. Saturday’s award ceremonies took place at the Oslo City Hall in the presence of King Olav V and Queen Sonja, while the other Nobel prizes – for chemistry, physics, medicine, literature and economics – were formally presented during ceremonies in the Swedish capital, Stockholm, later Saturday.