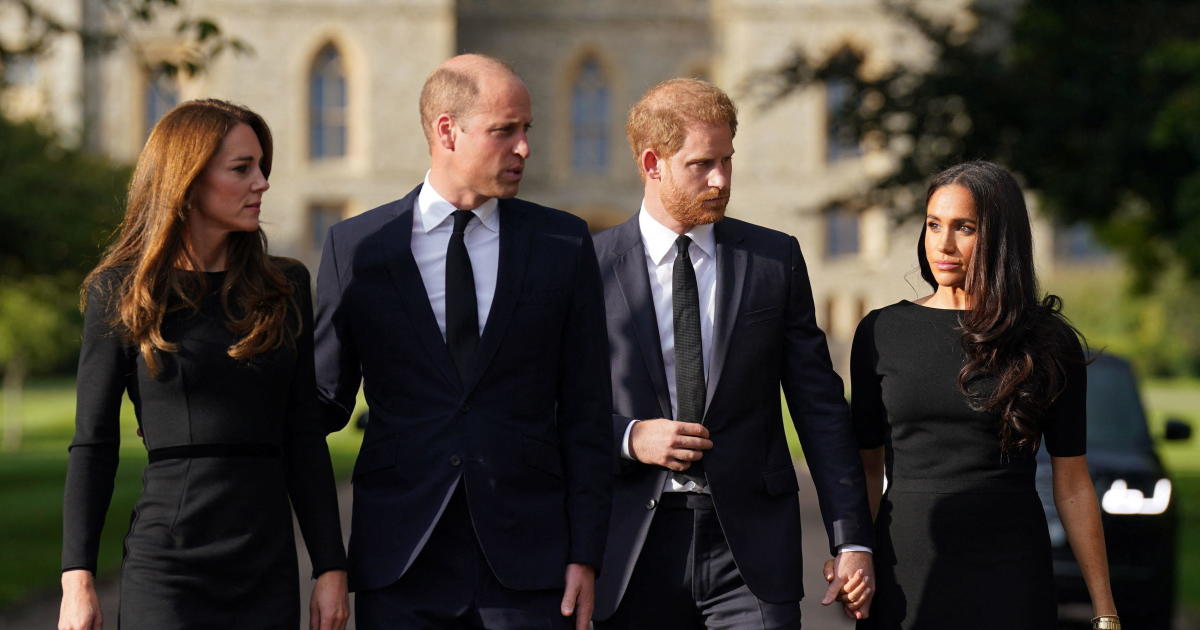 
The second half of Netflix’s documentary miniseries on Prince Harry and Meghan, the Duke and Duchess of Sussex, hit servers around the world Thursday morning. In it, the couple paint a stark picture of the animosity that grew between themselves and Harry’s closest family members amid what they say was racist and defamatory coverage by the British media. All of which, they say, drove them away.

Harry says the tension — which he and Meghan blame on the rigidity and self-preservation-at-all-cost mentality of the royal family, along with the mercilessness of Britain’s tabloid press — exploded in a meeting with his father, now King Charles III, and his brother Prince William shouting at him while his grandmother Queen Elizabeth II sat and looked on.

The royal family has declined to respond to the allegations in the series thus far, but it has denied Harry and Meghan’s allegations of racism and said the issues raised by the couple, “particularly that of race, are concerning.” Buckingham Palace has said it would address the matters privately.

Below are the top takeaways from the final instalments of the show, which has become Netflix’s most-streamed documentary ever. You can read here about the highlights from the first three episodes, which dropped last week.

The couple say Harry’s family became unhappy during their trip to Australia, when Meghan started exuding star power. There were perceptions, they say – which echoed sentiments felt about Harry’s mother Diana during her marriage to then-Prince Charles – that the royal outsider was taking too much attention away from the more senior members of the family.

“The issue is, when someone who married in — a supporting act — is stealing limelight from someone born into this,” Harry says in episode four of the series. “That upsets people, shifts the balance.”

It was around then, the couple says, that the British tabloids started criticizing Meghan, and in particular painting her in a negative light against her sister-in-law Kate.

The couple have said for years that the negative media coverage took on racist overtones and had a deep impact on Meghan’s mental health. In the documentary, they say it hit her particularly hard when she realized that much of the British public accepted what the U.K. tabloids were printing as fact.

Meghan: “I needed help, but I wasn’t allowed”

Both Harry and Meghan portrayed the royal family as extremely reluctant to show any public signs of vulnerability — to the extent that Meghan claims she was told not to seek mental health support when she needed it most. The couple first revealed Meghan’s struggles with mental health during their interview with Oprah Winfrey last year.

Harry recounts a moment many years ago in the Netflix series when he said his mother Diana was crying in a car and her husband Charles told her she had “30 seconds” to straighten out her makeup, put on a smile and emerge to face the press.

Meghan, they say, found herself under the same kind of pressure, from both the press and the family, and it led her to suicidal thoughts.

“I thought if I wasn’t around anymore, this all stops,” she says in episode four.

“I remember her telling me that — that she’d thought about taking her own life,” says her mother, Doria Ragland, breaking down in tears in the episode. “That broke my heart… That’s not an easy one for a mom to hear.”

“I needed help, but I wasn’t allowed to,” says Meghan. “They were worried how it would look for the institution.”

Prince Harry says he knew his wife “was struggling,” but he “never thought it would get to that stage. I felt angry and ashamed. I didn’t deal with it very well… what took over my feelings was my royal role.”

“You are making people want to kill me”

Meghan and Harry have maintained for years that the British press deliberately attacked the mixed-race American duchess, casting her as an intruder and detractor.

“I saw cartoons of me on all fours and Meghan holding a dog collar,” recalls Harry in the series.

Meghan blames such reports for whipping up hatred of her that leaked from the press onto social media, pointing to one tweet in particular that said she “just needs to die, someone should do it.”

“You are making people want to kill me,” Meghan says in episode five of the press attacks. “It’s not just a tabloid, it’s not just some story, you are making me scared… That night, to be up and down in the middle of the night checking on security, that’s real — are my babies safe? And you’ve created it for what? Because you’re bored, or because it sells your papers? It’s real what you’re doing, and that’s what I don’t think people understand.”

The former head of counterterrorism policing in Britain said recently that the threats Meghan faced were indeed “disgusting and very real,” coming largely from the far-right.

A miscarriage, and “the unravelling”

Harry, Meghan and their associates say in episode five of the Netflix series that “everything changed” about their relations with other royal family members after the couple’s decision to take on Britain’s powerful tabloid press over what they saw as a barrage of negative, unfair articles.

It was sparked by the Daily Mail tabloid reprinting parts of a letter that Meghan wrote to her father — which she says in the series she was advised to write by “senior members of the family.”

“It was horrendous,” Meghan says, referring to the leaking of the letter to the media and the Daily Mail newspaper’s selective printing of portions of it. If the paper had printed the entire letter, she says, “it would it have painted a completely different picture,” as she says they removed “everything that described the media as manipulating” her father.

The couple say they met with senior royals and lawyers and pushed for quick legal action against the newspaper’s publisher.

“We had to draw a line,” says Meghan. But she says the royal family did nothing.

Recalling a conversation with Prince Charles, Harry says in the docuseries: “My father said to me: ‘Darling boy, you can’t take on the media, the media will always be the media.'”

That was a point on which Harry says he and his father “fundamentally disagree.”

“After months of saying she needs to do something about this, we took our own legal advice,” says the prince. Meghan says that after she and Harry’s 2019 decision to file a lawsuit against the Daily Mail independently, “everything changed… That litigation was probably the catalyst for all of the unravelling.”

Harry even blamed the Daily Mail article and the stress it caused to his wife for a miscarriage she suffered in July 2020.

“Bearing in mind the stress that that caused, the lack of sleep, and the timing of the pregnancy,” says Harry, “I can say from what I saw, that miscarriage was created by what they were trying to do to her.”

The couple eventually won their legal battle with the Daily Mail’s publisher, with British courts ruling that the paper had breached Meghan’s privacy.

A “terrifying” meeting, without Meghan

As the negative press coverage continued, the couple say they felt increasingly isolated from other members of Harry’s family, so they started looking west, considering a move out of the U.K. and abandoning their royal titles.

Meghan says in episode five that they “decided we were going to be stepping back — not stepping down, but stepping back.” But before they could agree to the details of a new arrangement with the family, Harry says that “key piece of information — that we were willing to relinquish our titles — had been leaked.”

As Meghan returned to Canada, where they were living at the time, to be with their son Archie, Harry was called to a meeting at his grandmother’s country estate in Sandringham.

“Imagine a roundtable conversation and you as the mom and the wife — and the target in many regards — aren’t able to have a seat at the table,” Meghan says of that meeting in the documentary, with Harry adding: “It was clear they planned it so you weren’t in the room.”

Harry says he went in hoping to arrange a “half in, half out” royal status for his nuclear family, “but it became very clear that goal was not up for discussion or debate.” He says the meeting descended into his father and brother, both future kings, shouting at him as the queen listened in silence.

“It was terrifying to have my brother screaming and shouting at me, and my father say things that simply weren’t true, and my grandmother quietly sit there and take it all in,” he says.

Harry says the meeting ended “without a solidified action plan. From their perspective, they had to believe it was more about us and the issues we had as opposed to their partner — the media — and the relationship that was causing so much pain for us. They saw what they wanted to see.”

“The saddest part of it,” Harry adds, “was this wedge created between me and my brother, so that he’s now on the institution side. And part of that I get — I understand that’s his inheritance and its already engrained in him that part of his responsibility is the survival of this institution.”

Harry suggests what came next was a final straw. Within just hours of the tense meeting, the tabloids were out with stories “that said part of the reason we were leaving was because Meghan had bullied us out.” He says the palace released a “joint statement” about the couple’s plans, but “no one had asked me to put that out.”

Harry says it was a sign that his family was willing to feed lies to the press to protect the royal institution — at the expense of the truth and himself and his wife.

“Within four hours they happened to lie to protect my brother, but in three years they never would protect us,” says the prince. It was then he says he knew they had to leave Britain, though he insists in the documentary that Meghan “never asked to leave.”

Tucker Reals is the CBSNews.com foreign editor, based at the CBS News London bureau.