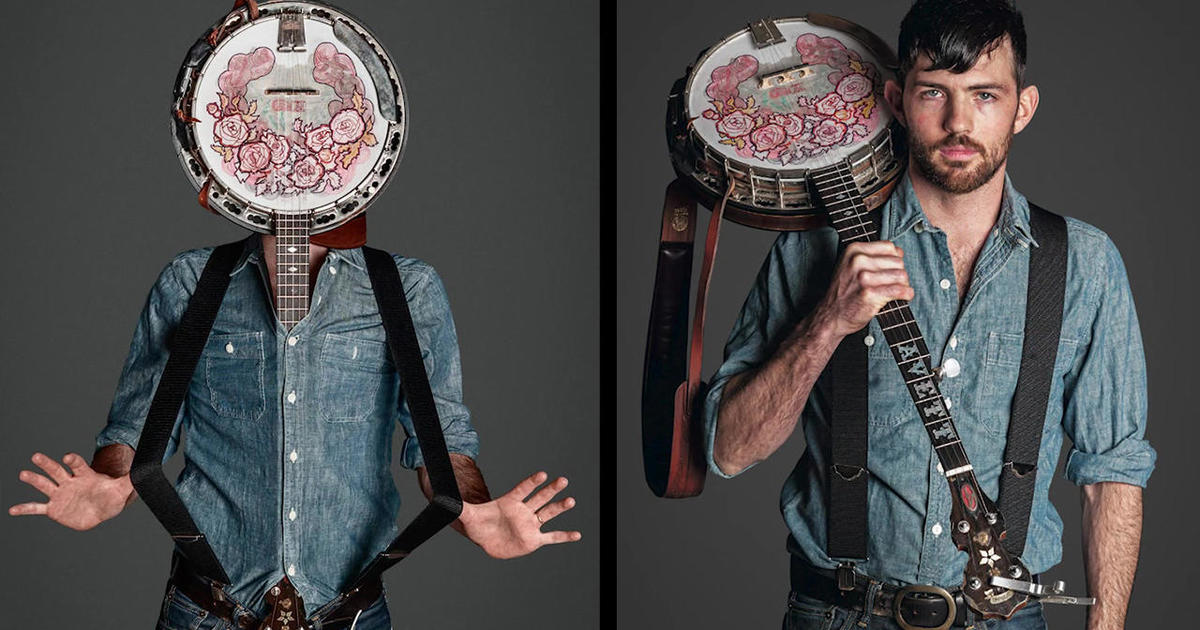 
If you happen to walk past Michael Weintrob’s photography studio in East Nashville, Tennessee, you’d notice something unusual happening inside. A ’58 Stratocaster guitar donning a fake mustache and sunglasses has come to life like a rock ‘n’ roll creature emerging from the depths of some hellacious music studio.

The subject of the portrait is actually legendary rocker John Oates, and that guitar, purchased in 1973 on NYC’s Upper West Side for $125, has appeared on every Hall & Oates record to date.

“I think that these instruments are an extension of who these musicians are,” Weintrob told CBS News. “And one might say that they’re hiding behind them, or maybe they’re just showing their true self, because this is what they think about, that’s where their heads are, really.”

Born and raised in Birmingham, Alabama, Weintrob discovered a passion for photography at an early age. That passion would eventually develop into a successful career as a live music photographer.

“Before I moved to Colorado, my father gave me a Nikon 4004 camera, and that was the first time I ever had a real kind of camera in my hands,” he said. “I remember when I was first starting to take pictures with that camera, it was 1996 and I went to a Blues Traveler concert in Sunrise, Florida. And I was taking photographs of the band. And it was a really wonderful feeling. I felt like I was at the concert, but I was doing my own thing at the concert.”

In 2000 he was the house photographer at the Aggie Theater in Fort Collins, Colo. “I would go backstage and I would take pictures of the bands and, you know, you’re a photographer, so you know how it’s like to try to get emotion out of people. It’s really difficult, right?

“So, I remember the Derek Trucks Band was performing there that night, and all the guys in the band were backstage and I was about to shoot a portrait of the band, but the bass player wasn’t there. The bass player, Todd Smalley, came running down the stairs. He had his bass. I said, ‘I don’t know, man, do something crazy. Put your bass on your shirt.’ So, he puts his bass down his shirt and down his pants. And I took this portrait of them.”

“It wasn’t like a light bulb went off in my head saying, Oh, I’m going to cover these people’s faces with their instruments. This is going to be my project. I didn’t even know that photography projects existed, or art projects existed at that time.”

In a digital world where a musician’s image is everything, Weintrob’s abstract visuals are hardly one-note. So how does he get musicians to agree to allow their instruments to take center stage in a photograph?

In New Orleans, one of the first musicians to sit for Weintrob’s project, George Porter Jr. of The Meters, described why: “Well, my immediate thought was that this is not a picture of me; this is a picture of the bass – the bass is my head. You know, I thought that it was kind of strange! But, you know, it was unique. So, when we got to see the proofs – because he’s didn’t print them without asking, he let us see it – my wife said, ‘Oh, this is great pictures here.’ Yeah. So, it was a done deal.”