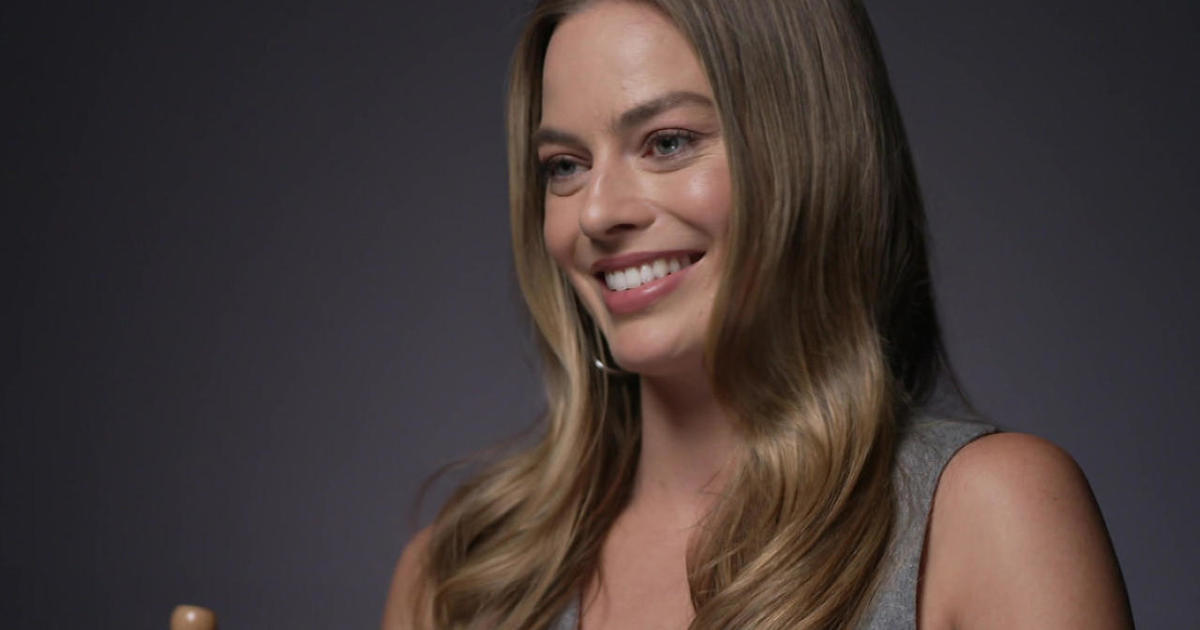 
In the movie biz, the Paramount lot in Los Angeles has always been sacred ground: a crossroads for stars of all sizes, and it still is. Two-time Oscar-nominee Margot Robbie says it’s a place she never gets tired of. “It was so surreal being on the Paramount lot,” she said. “It’s so exciting. There is nowhere more magical, nowhere more fun than a movie set.”

And she should know. Her new film, “Babylon” (from CBS’ parent company, Paramount), is a picture made the way they used to make ’em, and maybe, never will again. Director Damien Chazelle takes us on a three-hour-plus deep-dive into the chaotic underbelly of 1920s Hollywood, an epic story told in beautiful and sometimes lurid detail, with Robbie’s character running off the rails in a place where the parties never seemed to end.

Smith said, “It seems like you’re all about taking risks.”

“Yeah, I like taking risks,’ said Robbie. “What can I say? I’m a thrill seeker. if it doesn’t scare the s**t outta me, I normally don’t really go for it.”

And in “Babylon,” there was a lot to be scared of. Her character, the young actress Nellie LaRoy, is a hungry outsider who turns out to be talented beyond anyone’s expectations, with powers like the ability to cry her heart out on command.

“Okay, so let’s talk about this crying-on-cue thing – you can really do that?” asked Smith.

“Yes. I did 300-and-something episodes on a soap, so I had a fair share of practice crying on cue!”

How? “I don’t know. I think it’s, like, a muscle. I could say to a director, ‘Do you want it on my left eye or right eye? And tell me the word you want it to drop,’ and they’ll say that.”

“And what is going through your head, like, where does it come from?”

“I don’t know. It just, honestly, it sounds so stupid and derivative, but I just think of something sad,” she laughed.

But in her life, she says, there’s really not much to be sad about.

Margot Robbie was raised by a single mom in Queensland, Australia. Through sheer persistence, she hit paydirt at age 17 with a role on the popular Aussie soap “Neighbours.” Cue the tears!

She was a perfect fit for the show, almost. “I had a very strong Australian accent,” she said.

“It was too Australian for ‘Neighbours’?” asked Smith.

“Way stronger. Too Australian for ‘Neighbours’! They had a dialect coach come in to make me sound less Australian for the most Australian TV show ever. Like, just not nice on the ear! And they tried to round it out. They’re like, ‘You’re so nasal. We need to just round that out.'”

But her American accent was good enough to land her a series here, “Pan Am,” in 2011. It only lasted one season, so she started sending out audition tapes, including a Hail-Mary pass to a casting agent for a new Martin Scorsese film. “The Wolf of Wall Street.” Robbie said, “No part of me considered that my tape would ever be seen by Martin Scorsese.”

And she was as surprised as anyone when she got a bite. When she was first told, “Marty wants to see you,” she said, “I was so confused. I didn’t know who ‘Marty’ was, to be honest. And I was, like, ‘Who is Marty?’ They’re like, ‘Martin Scorsese.’ And I was, like, ‘How does he know who I am?’ ‘He watched your tape.’ ‘Martin Scorsese watched my audition tape?’ And they’re like, ‘Yeah, and he wants you to come in and read with Leo.’ And I was like, ‘Leo, as in Leonardo DiCaprio? Oh my God. I’m on nickname basis already with everyone.'”

Her performance opened a lot of eyes, and a lot of doors. Since then, she’s played everything from the Queen of England (in “Mary, Queen of Scots”), to a real doll (in the upcoming “Barbie”), to a complete psychopath (Harley Quinn, in “Suicide Squad”).

In 2014 she started her own production company to make female-focused films, like “I, Tonya.” Robbie actually learned to skate like an Olympic figure skater, and to fight like Tonya Harding.

Her turn as Tonya got her the first of two Oscar nods, but also put her on the map as a producer, drawing comparisons to Katharine Hepburn, who’d used her own business sense to help bring “The Philadelphia Story” to the screen.

Smith asked, “What do you think of that comparison?”

“There could be no higher praise for me,” she replied, “because I adore Katharine Hepburn. But yes, I think I’ve always … had a business-savvy brain.”

And Robbie’s success has allowed her to do things even more important to her than movies.

Smith asked, “When you first got your first paycheck, you had kept a written record of all the money that you’d borrowed from your mom?”

“God, you do your research!” Robbie said. “Yeah. I have that piece of paper still. I kept it. Yeah, everything I owed my mom, I had it written down. She’d take money out of like, the house mortgage, lend me money. So, I always knew, I was like, ‘Oh, gotta pay that back.’ And then one day when I made enough money, I just paid that whole mortgage off completely. I was, like, ‘Mom, don’t even worry about that mortgage anymore. It doesn’t even exist anymore.'”

“You paid off her house?”

“Yeah. Honestly, anyone in my position, you’d do that for you mom. Of course, you would.”

She’s made her mom proud in other ways: this year the British Film Academy celebrated her lifetime in film. Never mind that she’s only 32. “At first, I was like, ‘I don’t think I should be getting this. Like, aren’t I too young to be getting anything that has the word ‘lifetime’ in it?’ But then I was like, ‘But I’ll take it. Thanks!'”

And with her latest role, it’s clear that she’s earned her own place in Hollywood history.

“I know I’m hardworking and blah, blah, blah, but I’m also the luckiest, luckiest, luckiest, yeah, person in the world,” she said. “Every time that I did something, I was, like, ‘Ugh, now it’s the top, it will never get better than this.’ And then, somehow it’s just kept getting better and better. I’m so, so grateful and lucky.”

To watch a trailer for “Babylon” click on the video player below: