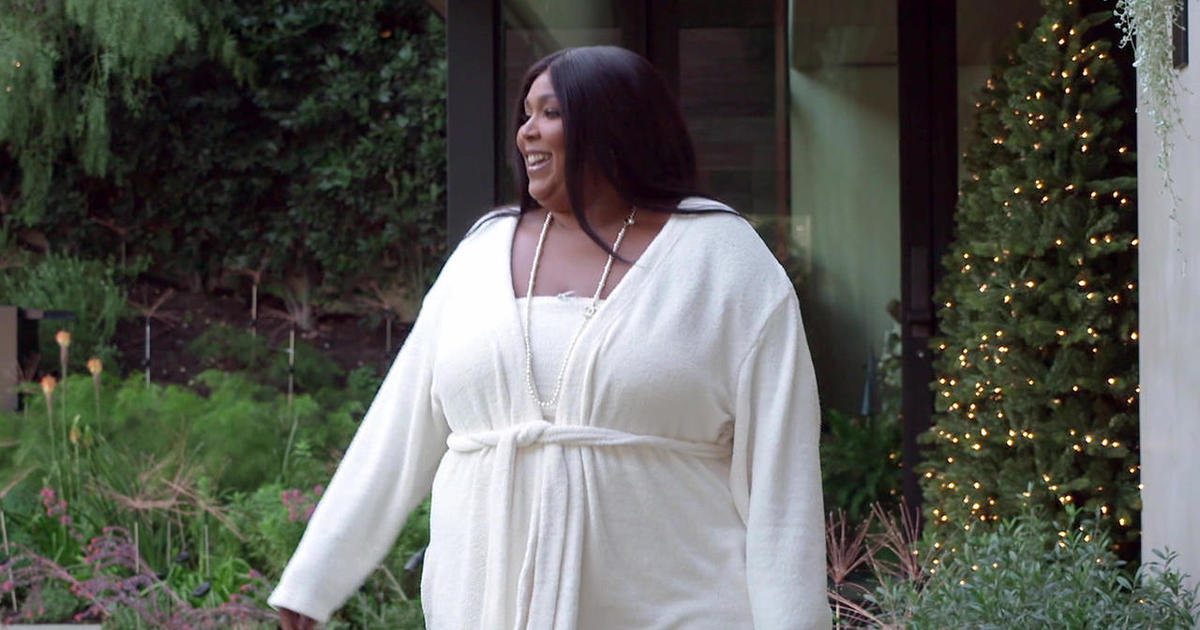 
For years, Grammy-winning superstar Lizzo dreamed of waking up in her own home on Christmas morning. Today, that dream came true. Her new place, in one of the swankier neighborhoods in Los Angeles, is the first house she’s ever owned.

Just ten years ago, she was sleeping in her car.

“Yeah. Whoo! Staying in, like, people’s rooms, and sleeping on their couches,” she said. “And now on this past tour, which I was blessed to, you know, stay in really nice places, but I was still like, ‘I miss my house. I can’t wait to come back home to my bed.’ And I was like, ‘This is the first time I’ve ever said this.’

Last week “Sunday Morning” was the first TV crew invited in to see it … and what a house it is.

“Nothing says Christmas in L.A. like a tree by the pool,” she said. “I don’t use the pool nearly as much as I said I would. I gotta get in there!”

The singer-songwriter is having quite a year. Her latest album, “Special,” is up for six Grammy Awards. She already has three Grammys chilling on her shelf (and there is room for more).

Smith asked, “Did you expect so many Grammy nominations?”

“I did not,” she replied. “I feel like, as an artist a lot of times, I don’t fit in with, like, the other artists who are making really cool songs, or songs you could play in the club, and turn up to.  I do feel like, ‘Oh, my God, I’m such a dork of, like, the music industry.’ But this is my mission. I’m gonna go and just make music that makes people feel good. I can’t cuss, but F being cool; I gotta do me. I gotta help people.”

“Once a nerd, always a nerd, seriously! It doesn’t matter what happens. I’ve been a nerd for so long that, like, I can’t really outgrow it or shake it.”

“You’ve made being a nerd pretty darn cool.”

Christmas came early for Lizzo this year; besides the Grammy nods, there was a highly successful tour, and something she didn’t see coming. Her TV show,  “Watch Out for the Big Grrrls,” a televised audition for backup dancers, was a hit, and won three Emmys.

She was stunned. At the award ceremony she said, “When I was a little girl, all I wanted to see was me in the media: someone fat like me, Black like me, beautiful like me.”

But her success is no surprise for the people who know her well.

“Lizzo” was once Melissa Jefferson, a Houston teen with talent to burn. Her high school band teacher, Manny Gonzales, pushed her to buckle down, and in 2019 we reconnected them:

Lizzo thanked her teacher: “I did it, didn’t I? You told my ass, you were like, ‘Get it together, girl, because you are special. Apply yourself.’  Those moments mean so much to me.”

Since then, there’s been a lot more music, and once the pandemic eased up, a lot more travel – which makes coming home to her very own kitchen that much sweeter.

She showed Smith some of her family’s holiday favorites, including yams, mac and cheese, and the traditional dressing.

But she wouldn’t give away her family recipes. “There’s onions in here. There’s a little secret surprise in here,” Lizzo said. “I feel like I can’t tell you. I feel bad. I like you. I like you a lot. But I can’t give up the family secrets!”

Around here, the food is vegan (“No butter, there’s no meat”), but still every bit a holiday feast.

In the early years of her career, Lizzo spent a lot of her holidays on the road apart from her family, so for the first Christmas in her new home she’s going big: By our count there were more than half a dozen Christmas trees, indoors and out. “It’s excessive, I know. Don’t come for me, America!”

“I know. Not having stuff for a long time, and now I’ve got it, I’m going overboard. I’m literally Santa Claus,” Lizzo said. “I’m really good at giving gifts, by the way. Like, I literally am Jolly St. Nick – birthdays, too. I’m the best in the game. I’m too good. I’m like, ‘If you didn’t cry when you open your present, I didn’t work hard enough.'”

She said her whole family will be with her today, except for her dad, Michael Jefferson, who passed away in 2010. “I don’t want to do the whole cliché, like, ‘He’s here with us right now,’ but I do feel like a part of him is with me, like, forever, ’cause it’s like you can’t really deny that. I feel very connected. Of course, it’d be nice to physically have him here. But … love has to be enough.”

Her dad dreamed that Lizzo would be able to make a living playing music. She’s done that, and along the way spread a message of love and self-acceptance – and maybe that’s the best gift of all.

Smith said, “You not only lived his dream; you’ve lived beyond.”

“Absolutely beyond,” Lizzo said. “I’ve lived beyond my dream, child. I’m like, ‘Girl, okay, time to start dreaming bigger. Let’s not even give ourselves a limit.’ Because you never know. You just really never know what God has in store for you.”

You can stream Lizzo’s Grammy-nominated album “Special” by clicking on the embed below (Free Spotify registration required to hear the tracks in full):