Landslide hits campsite in Malaysia, killing at least 21 people and leaving more than a dozen missing 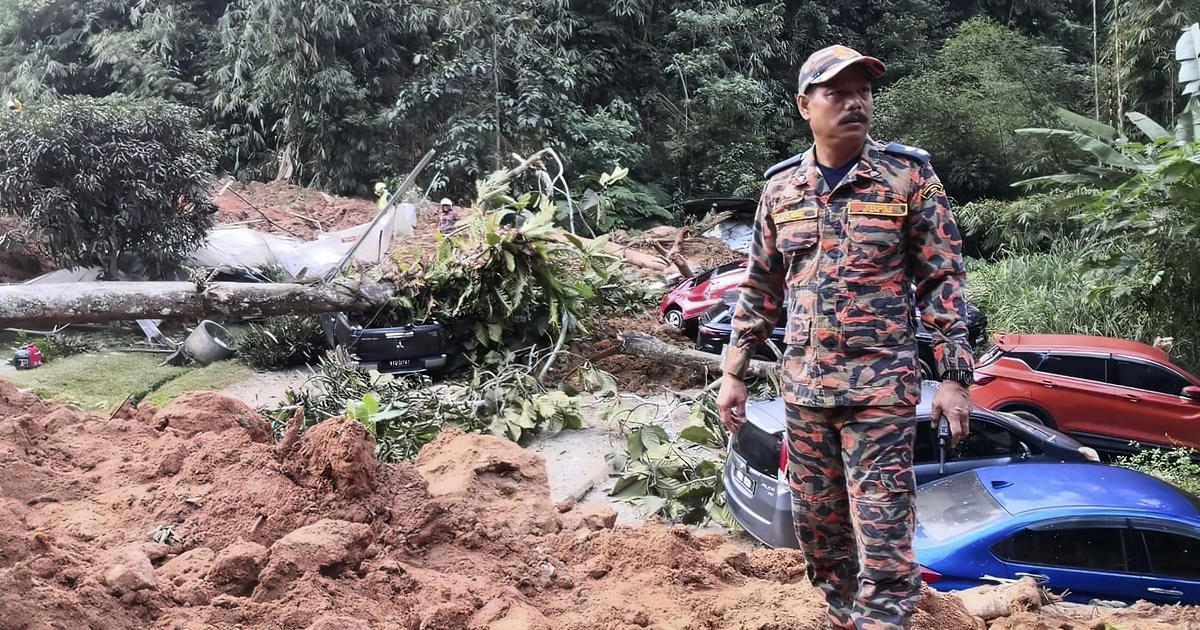 
Batang Kali, Malaysia — A thunderous crush of soil and debris killed 21 people at a campground in Malaysia on Friday, and rescuers dug through the mud in the night for another 12 who were feared buried in the landslide.

More than 90 people were sleeping on an organic farm when the dirt tumbled from a road about 100 feet above the site and covered about 3 acres. Two of the dead were found locked in an embrace, according to the state fire department chief.

Authorities told local media that the landowners did not have a license to run a campground. At least seven people were hospitalized and dozens more were rescued unharmed, said district police chief Suffian Abdullah.

Leong Jim Meng told the New Straits Times English-language daily that he and his family were awakened by a loud bang and felt the earth move at the campsite in Batang Kali, around 50 kilometers (30 miles) north of the capital of Kuala Lumpur.

“My family and I were trapped as soil covered our tent. We managed to escape to a carpark area and heard a second landslide happening,” the 57-year-old was quoted as saying. He said it was surprising because there was no heavy rain in recent days, only light drizzles.

Veronica Loi, who was camping at the site overnight and survived the landslide, told AFP that her family was sleeping when they heard a sudden, loud sound.

“We saw the tent beside us was totally gone,” she said.

It is currently the season for monsoon rains in Malaysia, and the country’s government development minister, Nga Kor Ming, said all campsites nationwide that are near rivers, waterfalls and hillsides would be closed for a week to assess their safety.

The Selangor state fire department posted photos of rescuers digging through soil and rubble with an excavator and shovels. Officials said the rubble is believed to be 8 meters (26 feet) deep. More than 400 rescuers as well as tracking dogs are set to work through the night to find the dozen people still missing.

Selangor state fire chief Norazam Khamis was cited by the Free Malaysia Today news portal as saying that two of the bodies found were “hugging each other” and believed to be mother and daughter. The fire department said five children were among those who perished.

Suffian, the district police chief, said the victims entered the area, a popular recreational site for locals to pitch or rent tents from the farm, on Wednesday. The campsite is not far from the Genting Highlands hill resort, a popular tourist destination with theme parks and Malaysia’s only casino.

After visiting the site late Friday, Prime Minister Anwar Ibrahim announced a special payment to the families of those killed as well as survivors.

Nga told local media that the campsite has been operating illegally for the past two years. The operator has government approval to run an organic farm but has no license for camping activities, he said. If found guilty, Nga warned, the camp operator could face up to three years in prison and a fine.

The farm where the campsite was situated — “Father’s Organic Farm” — changed its Facebook profile picture to all black on Friday.

The government has imposed strict rules with regards to hillside development, but landslides have continued to occur after bouts of bad weather.

In March, four people were killed after a massive landslide triggered by heavy rains buried their homes in a Kuala Lumpur suburb.

In one of the deadliest such incidents, a huge mudslide in 1993 brought on by heavy rain caused a 12-storey residential building outside the capital to collapse, killing 48 people.