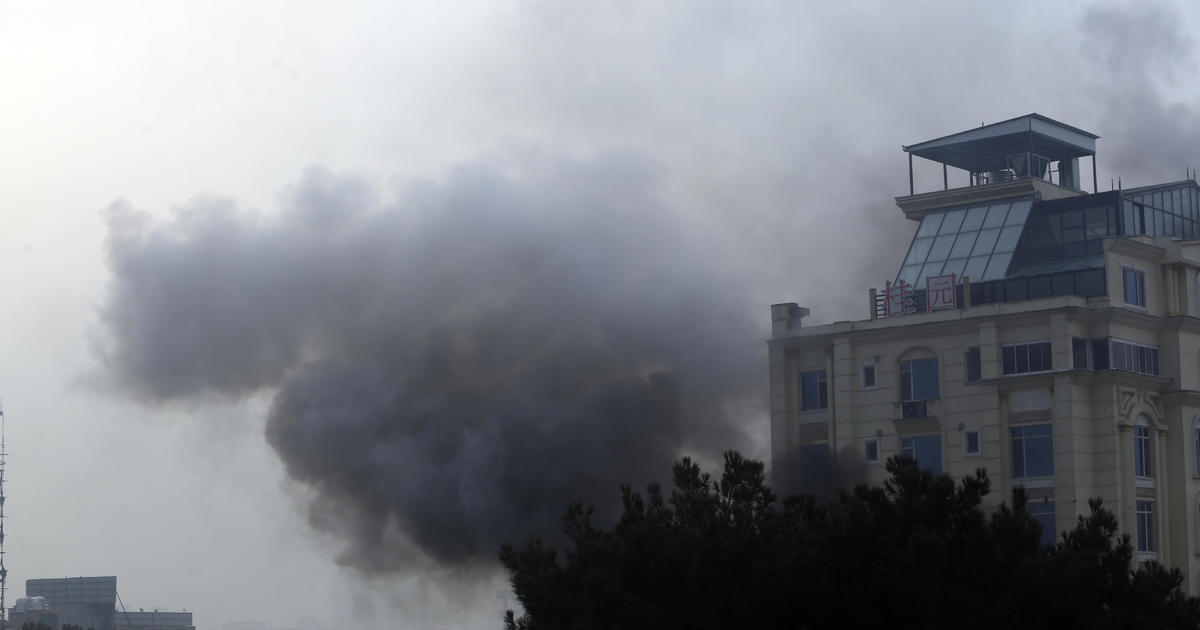 
A loud blast followed by gunfire was heard in downtown Kabul on Monday afternoon as assailants attacked a guesthouse used predominantly by Chinese nationals, according to the Kabul police. An Italian-run emergency hospital less than a mile away in the Afghan capital said it had received 21 patients from the attack, three of whom were dead on arrival.

A photo shared with CBS News by Kabul police showed Chinese signage on the wall of the multi-story building. A Kabul resident told CBS News by phone that Chinese nationals have frequented the hotel.

“At around 2:30, a hotel in Shar-e-naw area of Kabul city by the name of Kabul Hotel came under attack,” Kabul police spokesman Khalid Zadran told CBS News, adding that the hotel is used “by some foreigners and local Afghans.”

Videos posted on social media showed fire and thick smoke rising from a lower floor window of the hotel building. Another video, shot from a building opposite the hotel, showed men escaping from another window — one of them clinging desperately to an air conditioning unit before falling several floors.

The chief spokesman from Afghanistan’s ruling Taliban regime, Zabiullah Mujahid, said the attack ended after three assailants were killed in a firefight. He said only two foreigners were slightly injured after escaping out of windows.

No group immediately claimed responsibility for the attack, but the Afghan branch of the ISIS terror group, known as ISIS-K or ISIS Khorasan, has stepped-up attacks since the Taliban seized back control of the country and the U.S.-led military coalition pulled out in the summer of 2021.

Monday’s complex attack seemingly targeting Chinese nationals appeared to be the latest in a string of violent acts directed at the few countries that the Taliban can count amongst its allies.

On Sunday, China’s Ambassador Wang Yu met in Kabul with the Taliban regime’s Deputy Foreign Minister, Sher Mohammad Abbas Stanikzai, and called on the group “to pay more attention to the security of the Chinese Embassy in Kabul,” according to a statement from the Taliban Ministry of foreign affairs.

Last week, gunmen attacked the Pakistani ambassador at his embassy compound in Kabul, wounding a Pakistani guard. The ambassador himself narrowly escaped assassination. The attack was claimed by ISIS-K, and the Taliban is said to have arrested suspects.

In September, a suicide bomber blew himself up outside the Russian Embassy in the heart of Kabul, killing two Russian diplomats in what appeared to be the first attack on a foreign diplomatic mission in Afghanistan since the fall of the country to the Taliban.

Pakistan, Russia, China, and Iran, some of Afghanistan’s neighbors, have all been accused of supporting the Taliban at various points over the last 20 years. The Russians were even accused of putting up a bounty on American troops in Afghanistan.

Political analysts believe the attacks on the Taliban’s supporters highlight a growing danger for the country, and one which they believe will only increase as ISIS and other opposing groups try to show the Taliban is incapable of securing the country.

“The attacks against countries and individuals supporting the Taliban directly and indirectly will increase,” Ahmad Saeedi, a political analyst and former diplomat told CBS News. “Afghanistan is struggling with a regional intelligence war in which everyone is trying to pursue their own interest.”

Tariq Farhadi, a former advisor to Afghanistan’s Western-backed President Ashraf Ghani who now works as a political analyst, also said the Taliban should expect more such attacks against its allies. He also warned that many of the extremist group’s foot soldiers, who haven’t benefitted much directly from it seizing power, could be tempted to join opposing, possibly even more extremist groups.

“It is possible to see a more brutal group than the Taliban and ISIS in Afghanistan in the future,” Farhadi said.