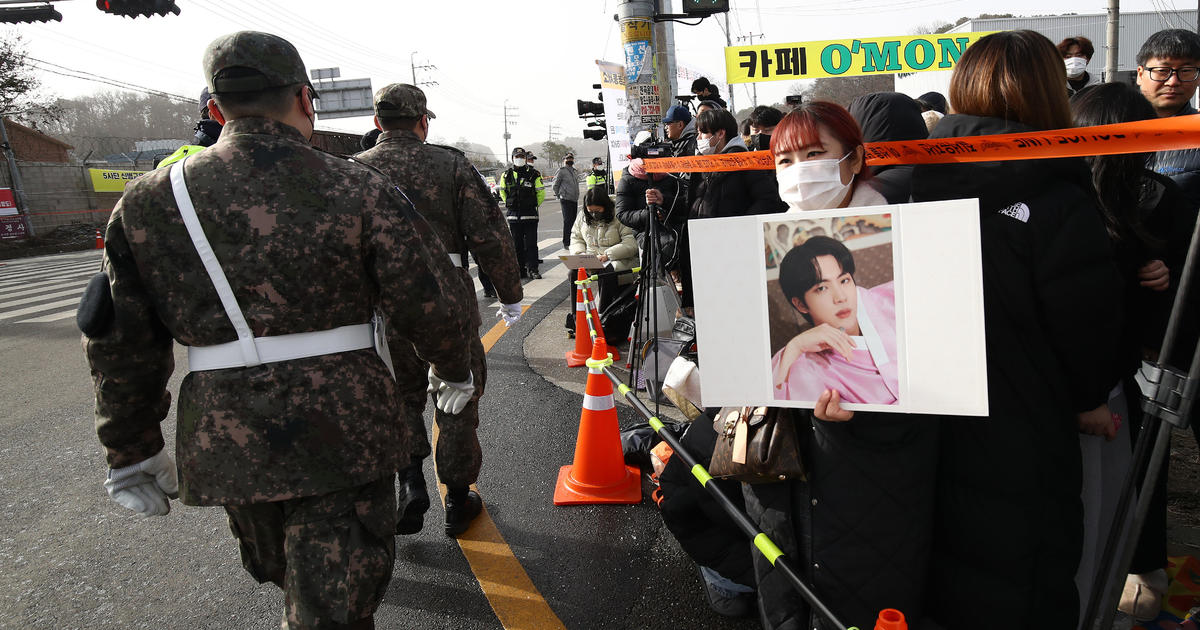 
Seoul — Jin, a member of South Korea’s K-Pop superstar band BTS, has shaved his head and joined the army. At 30 Jin is the eldest member of the band, making him first in line to put his pop career on hold to fulfil his mandatory national military service.

A big purple banner was hung near the entrance to the Yeoncheon County military training center Tuesday, welcoming “Jin and every enlisted man” as they signed up for service.

BTS announced in June that it would pause its touring schedule, leading to a sudden drop in the stock price of the group’s parent entertainment company, Hybe, of almost 25% in a single day.

A photo posted on the group’s Twitter account showed Jin, with his new regulation military buzz cut, laughing with his BTS bandmates. The accompanying message read: “My brother! Come back safe! I love you.”

Questions over whether the young men of BTS would be required to enlist under South Korean law bubbled for years, stoking heated debates over everything from the requirement being for men only, to whether the band’s huge cultural contribution and earning power — both domestically and as representatives of South Korea on a global stage — should exempt them.

After machinations by the government to grant the band a pass drew a sharp rebuke — especially from former members of the military — the Ministry of Defense ruled in 2019 that the boys of BTS would, in fact, have to serve.

Most healthy Korean men are required to serve in the military for 18 months.

Pop star Psy, of “Gangnam Style” fame, has even been enlisted twice: As he managed to squeeze in so many musical performances during his first stint in the army, officials deemed his national service inadequate and required him to enlist again. He has now completed his second enlistment period and taken his singing career back on the road.

But there is no guarantee for boy band members that careers shelved for military service will be waiting for them when they return. In the world of pop and popular culture, 18 months is a long time. Being out of the public eye for so long — especially for a band like BTS, which has members of a range of ages, meaning its hiatus will be staggered and drag on for years — can see even the most fervent of fanbases fade away.

And BTS may have the most fervent group of fans in the world – or at least on the internet. “The Army,” as they somewhat ironically call themselves, replied to the band’s tweet on Tuesday with remorse, lament, and vows to remain loyal to their K-Pop heroes.

“We will wait for u jin, we love u,” declared one fan under the user handle mia. Another simply posted a short clip of a woman crying on her knees with the word “ARMY” emblazoned over her, in front of a superimposed image of the car driving Jin into the recruitment center.

It is widely assumed at this stage that BTS will at least attempt to reunite in 2025, once all the members have fulfilled their military service requirement.

At a daily news briefing, a Defense Ministry official sought to reassure nervous fans about Jin’s safety as he enlisted, noting that some 300 security personnel were dispatched to help control crowds gathered at the site.

The force, consisting of members of the South Korean Army (the actual army, not the BTS fans), local police and fire departments were “jointly doing their best to prevent safety accidents.”

From Tuesday, Jin will go through five weeks of bootcamp training. It has been reported, though not confirmed by the military, that he will then be assigned to a front-line unit near the tense border with North Korea.