“I felt like I was dead”: The Taliban’s ban on women at college has hit Afghanistan’s brightest prospects 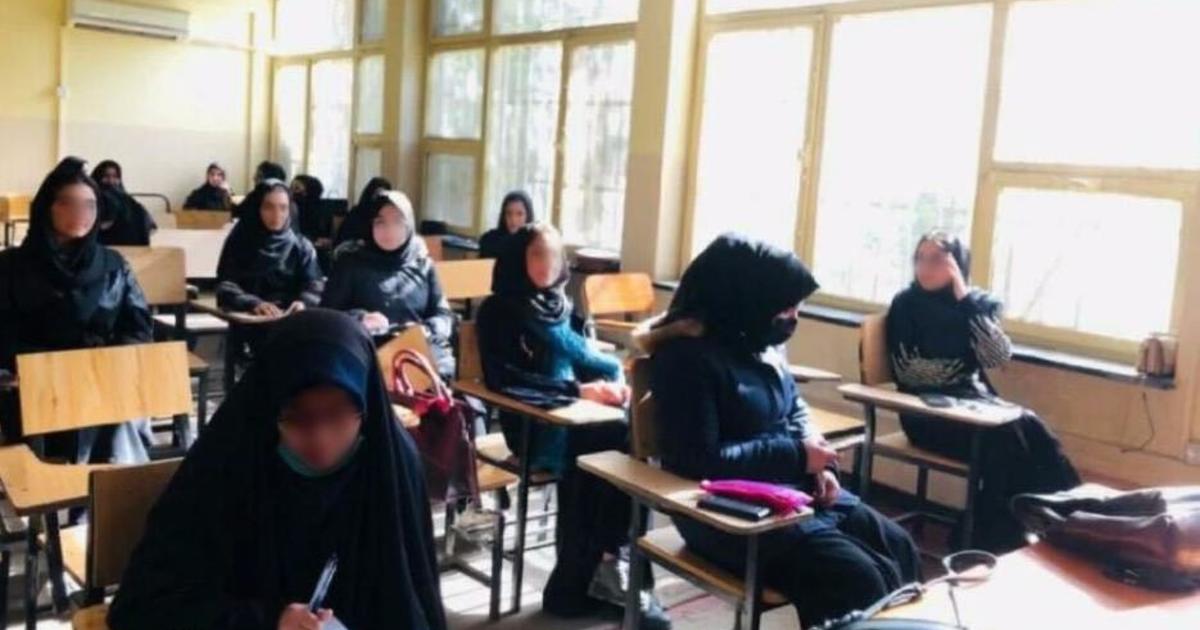 
When Afghanistan’s Taliban rulers issued a decree last month banning women from the country’s universities, the move was lambasted around the world as amoral and un-Islamic. It was the latest devastating blow to Afghan women and girls, who have lost most of the rights they gained during the two decades when the hardline Islamic group was forced out of power.

With the ban, the Taliban have robbed countless women of hard-fought dreams. Below are the stories of two such women, who tell CBS News how, after years battling long odds with hard work and determination, they are now staring down uncertain futures.

Below that is the one of the strongest indications to date of the deep importance the Taliban places on controlling women, from the regime itself.

When she was 17, Maryam stood on a rooftop holding a university entrance preparation exam book and watching as military helicopters bombed Taliban positions in a neighboring district of Badakhshan province, which had just fallen to the militants.

“The Taliban are close, leave the book,” her cousin shouted up from the front yard.

“Taliban have arrived, everything will be over,” her mother added, encouraging her to come down.

But Maryam, who was born in a poor, remote district of Badakhshan and had just graduated as a valedictorian from high school, told CBS News that in that moment, for her, “everything was transient.”

Undeterred, she continued her university preparation, and she was soon rewarded with admittance to the local Balkh University. After achieving the highest grades in her class, Maryam later transferred to the much larger Kabul University, in the capital.

She found her place among other young women from all over the country at their dorm in Kabul. It was her first time being away from her parents, and she was determined to succeed.

After Kabul fell back into Taliban hands in August 2021, Maryam joined a non-governmental organization helping to implement UNICEF education projects. She soon became the director of a project and was “enjoying being an independent woman.”

Then her bright future took a turn.

On Dec. 20, Taliban authorities announced that all women and girls would be prohibited from attending universities in the country. The order was followed by another decree that made it illegal for women to work for NGOs, including humanitarian agencies.

Maryam had already ordered clothes and made a list of friends, teachers, and relatives to invite to her graduation ceremony. She’d even picked a restaurant to celebrate the occasion with her elderly parents, who were set to come from their home in Badakhshan.

“Their only dream, and mine, was ruined,” she said.

Now Maryam remains largely locked in a room in Kabul.

“These days, I’m alone with my books,” she told CBS News. “But I have big dreams.”

Since she was a little girl, Saima had dreamed of becoming a journalist, but it was never going to be easy.

Her family was poor. She would often help her father sell fries on the streets of Kabul. After school she’d peel potatoes, hoping that her father would be able to help her with university tuition.

It was a tough promise for her dad to keep. He’d earn less than $5 most days. Saima said she “cried a lot” to get the money her father would have used to buy potatoes, but in the end, she got the roughly $60 needed to enroll in Rana University’s journalism program. She felt guilty stepping into the register’s office with the wad of cash.

She knew her father couldn’t afford tuition for the next semester, but she was determined to earn a degree, somehow. As the second semester began, a teacher told Saima to leave class because she hadn’t paid her tuition. With tears in her eyes, she went to the finance department to ask for an extension. A number of teachers pitched in $7.50 to cover her bill.

From that point on, with no other options, Saima worked to remain at the top of her class, and every year she was awarded a scholarship to cover her tuition that was granted to the student with the highest grades. She said she became a role model for her fellow students.

At 20, Saima was in her third year at the university, working toward her degree in journalism. Financial hardship couldn’t stop her, or thousands of other Afghan women, from getting into college classrooms, but the Taliban did.

“The night I heard about the university ban, I felt like I was dead inside, and I’m just an empty corpse,” she told CBS News.

Afghanistan is the only country in the world that bans women and girls from work and education on the pretext of Islamic norms and culture. The decision by the hardline Taliban regime has been condemned and challenged by other Muslim countries and prominent Islamic organizations as a contraction of the teachings of Islam.

The grand imam of Al-Azhar University in Cairo, Egypt, often described as the world’s most prestigious Islamic academic institution, called the education ban a “shocking decision” that “radically contradicts the call of the Quran.”

“The decision contradicts Shari’ah [Islamic law] and conflicts with the explicit call from men and women to pursue knowledge from cradle to the grave,” the university said in a statement. “Indeed, Islam firmly denounces such banning since it contradicts the legal rights that Islam equally guarantees for women and men.”

The Organization of Islamic Cooperation (OIC), with its 53 member nations, called for an urgent campaign to mobilize Islamic countries against the Taliban’s decision, which it said was “not based on texts in Islamic law.”

The Taliban have issued a set of explanations for the ban, with the regime’s acting Minister of Higher Education, Neda Muhammad Nadim, saying it was necessary because students traveling from one province to another would risk violation of rules on females traveling unaccompanied; because some subjects taught at the university level contradict Afghan cultural values; because students have improperly adhered to rules on wearing the Islamic hijab, and because it could not be ensured that classes would be segregated by sex.

In an interview clip posted to his official website, Nadim hints at a strong motive for the ban, which in effect returns Afghanistan’s women to the place they inhabited when the Taliban previously ran the country, before the 2001 U.S.-led invasion prompted by Osama bin Laden’s attack on America — and the Taliban’s refusal to hand him over.

“The question arises in peoples’ minds, ‘Why don’t the Islamic Emirates open schools… Why the restrictions on hijab use? Why aren’t women allowed to work… and why don’t we care about peoples’ interests?” asks Nadim in the clip shared on his Twitter account. “If we, the Islamic Emirates, cared about peoples’ prosperity and civilization, if this was the main goal, we wouldn’t have waged a war from the beginning. We would have handed over them, Osama, and the freed women.”

Address the nations which have sanctioned or withheld funding from the Taliban government since their re-taking of Afghanistan in 2021, including the United States, Nadim says: “Whether you sanction us, come for another war, or even atom bomb us, we have to implement the Shariah law and force women to wear hijab.”