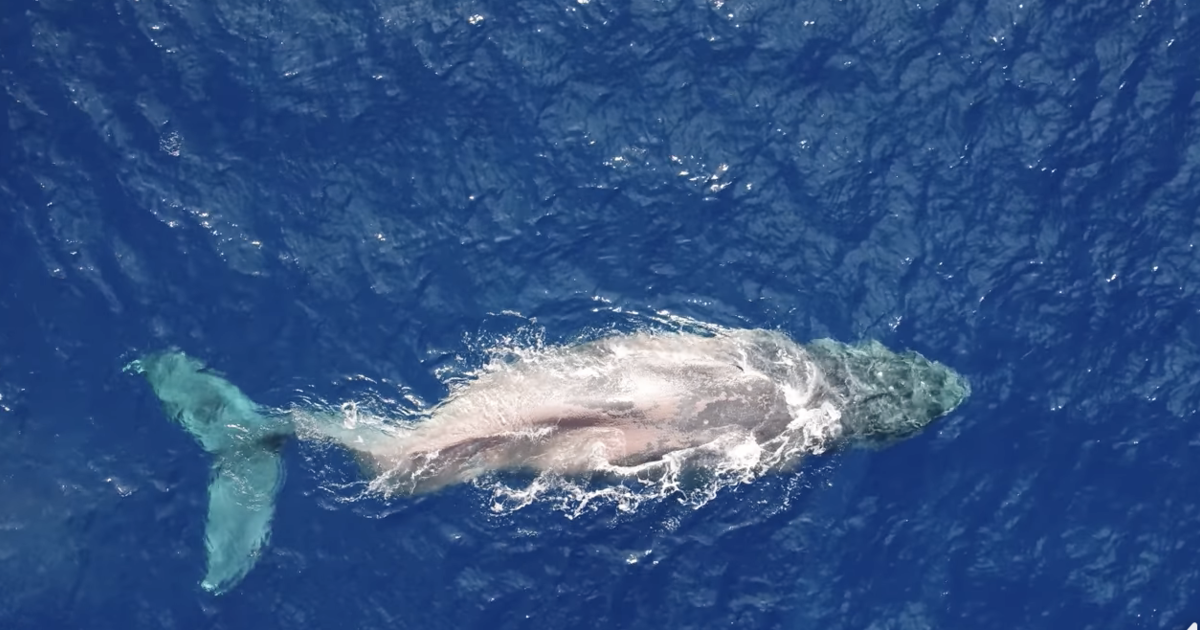 
A beloved humpback whale named Moon was left with a broken spine and completely unable to use her tail to propel her through the sea after being struck by a ship. But she’s now on a mission of “tenacity & tragedy,” having swum more than 3,000 miles from Canada to Hawaii in what experts believe is her “last journey” before she dies.

Researchers have known about Moon for years. Just two years ago, they saw her passing on traditions to her calf. But then this past September as she swam alone by the Fin Island Research Station in Northern British Columbia, they realized something was wrong – her spine was deformed.

From a bird’s eye view, it was clear that she had been hit by a vessel, researchers said. Her spine, normally straight, now had a massive “s” shape running from her dorsal fin in the middle of her back to her fluke. The organization BC Whales said her “severe spinal injury” has left her unable to use her tail, which provides the up-and-down motion necessary to help her effortlessly swim through the ocean.

This kind of injury, the organization said, will likely result in her death. But that hasn’t stopped the massive mammal from trying to make the most out of whatever time she has left.

On December 1, nearly three months after her injury was first noticed, Moon was spotted again, this time thousands of miles away.

The Pacific Whale Foundation found her swimming off the coast of Maui, Hawaii – more than 3,000 miles away from British Columbia with a “twisted body” and in declining health. According to the Marine Education & Research Society, she had to use her pectoral fins to make the journey, as her tail was paralyzed.

“She was likely in considerable pain yet she migrated thousands of miles without being able to propel herself with her tail,” BC Whales said. “Her journey left her completely emaciated and covered in whale lice as testament to her severely depreciated condition.”

This trek will likely be Moon’s last trek.

“In her current condition, she will not survive to make the return journey,” BC Whales said. “We will never truly understand the strength it took for Moon to take on what is regrettably her last journey, but it is on us to respect such tenacity within another species and recognize that vessel strikes lead to a devastating end.”

The group said that her journey reveals the “stark reality” of what happens when an animal of the sea is hit by a ship.

“It speaks to the extended suffering that whales can endure afterwards,” the organization said. “It also speaks to their instinct and culture: the lengths whales will go to follow patterns of behaviour.”

Vessel strikes are a major threat to whales and other marine species. From 2010 to 2014, NOAA reported that 37 whales had been injured by vessel strikes along North Amerca’s Atlantic coast and in the Gulf of Mexico, with similar estimates along the Pacific coast.  Other studies have shown a significantly higher impact, with one published in 2017 estimating that up to roughly 80 blue, fin and humpback whales are struck along the U.S. west coast every year.

“But these minimum estimates are likely low because the number of deaths and serious injuries that go unreported is unknown,” the government agency said, adding that vessel strike estimates for smaller marine mammal species are likely even more underestimated.

Professional diver Kayleigh Nicole Grant came across Moon in Hawaii, and said that she is now being followed by sharks as her condition declines. Another whale seems to now be escorting her through her doomed journey, an indicator of the “compassion” whales share.

“It was so hard to see with my own eyes a humpback whale suffer so much,” Grant said. “All of her suffering is due to human impact & it kills me that we cause so much damage to nature & wildlife.”