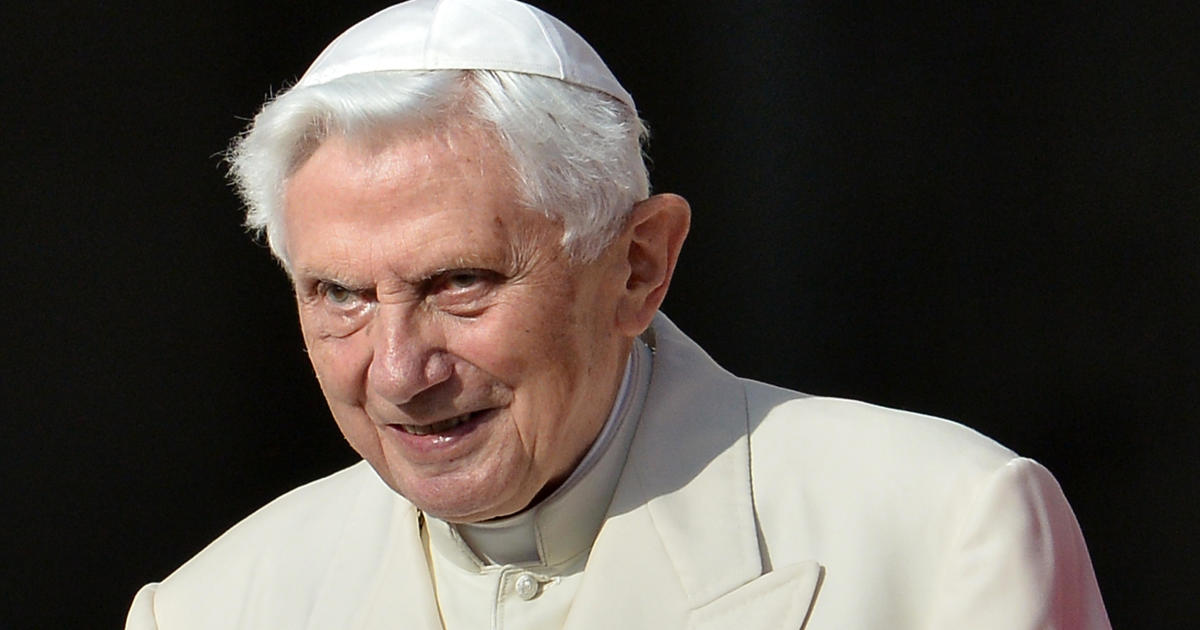 
Rome — Benedict XVI, the pope who shocked the world by stepping down from the leadership of the Roman Catholic Church in 2013, has died at the age of 95. The Vatican announced his death on Saturday.

Benedict had been in failing health and his successor, Pope Francis, said Wednesday that Benedict was “very sick” and asked the faithful to pray for him.

Nothing defined Benedict XVI’s pontificate so clearly as its ending, and his majestic farewell flight over the Eternal City. He had become the first pope in more than 700 years to voluntarily resign.

Benedict said that his mental and physical strength had deteriorated “to the extent that I have had to recognize my incapacity to fulfill the ministry entrusted to me.”

A naturally shy man, Pope Benedict XVI always said he had no ambitions to lead the world’s 1.2 billion Catholics. But he was chosen in 2005 to succeed Pope John Paul II. At 78, he took on the role as the oldest pope in nearly 30 years.

“I prayed to God, don’t do this to me,” he later said. “But evidently, this time, he didn’t listen.”

Born Joseph Ratzinger in a small town in Germany in 1927. He was required to join the Hitler Youth at age 14, and was conscripted into an anti-aircraft unit in the German army in 1943. He deserted, and was taken prisoner by the Americans.

He entered the priesthood after the war and rose to become a cardinal. In the powerful position as head of the Vatican’s Congregation for the Doctrine of the Faith, he earned the nickname “God’s Rottweiler” as a rigid enforcer of church policy. It was a characterisation his biographer John Allen said Ratzinger worked hard to change.

“He was seen as harsh, as authoritarian, as controlling… and it was important to him, right out of the gate, to revise that… public image, and I think by and large he did so quite successfully,” said Allen.

He did it by being what he really was: a teacher, and one who spoke clearly and without undue theological jargon.

As pope, Benedict’s weekly audiences at the Vatican drew huge crowds, but his efforts at inter-religious dialogue sometimes fell short.

He offended many Jews by reinstating a bishop who denied the size of the Holocaust, and then stopped short of an apology on a visit to the Holocaust memorial of Yad Vashem.

“They lost their lives. But they will never lose their names,” he said.

On a trip to Africa he dismissed condoms as a way to prevent AIDS. He called gay marriage a threat to humanity, and held firm to doctrines such as no female priests.

But he also embraced modern technology. Benedict was the first pope to do a TV question-and-answer session — albeit with pre-screened questions — and he oversaw the launch of an official Vatican website and a papal Twitter account.

During a trip to the U.S. in 2008, he made a powerful symbolic visit to Ground Zero in New York.

As age began to take its toll, Benedict went to Cuba and Mexico in defiance of his doctor’s wishes, but the challenges only grew.

Critics hit out at his slow response to the decades of cover-up of the scandal of sexual abuse by priests. And then came the scandal of leaked documents that disclosed corruption and mismanagement in the Vatican.

After eight years at the top of the Church hierarchy, Benedict made the stunning announcement in a speech to the cardinals of his decision to step down.

He was succeeded by Pope Francis, while Benedict assumed the title of pope emeritus and retired to a monastery in Vatican City.

During his papacy, he initiated some of the changes that Francis would later get credit for. He began the reform of Vatican finances. And he was the first pope to meet with victims of sex abuse and offer a public apology, condemning what he called “filth” in the church.

In 2016, Francis held a ceremony at the Vatican to honor Benedict on the 65th anniversary of his ordination, celebrating his decades of service to the church. As he got older, appearances became more rare, though he was seen — mug of beer in hand — celebrating his 90th birthday with a group from his native Bavaria.

During his retirement, a frail Benedict would leave Italy only once, to visit his elder brother, also a priest, on his deathbed.

A scholar who had wanted nothing more than to hide in academia, Benedict made an indelible mark on the church — and history — when he became the pope who decided it was time to go.

Chris Livesay is a CBS News foreign correspondent based in Rome.