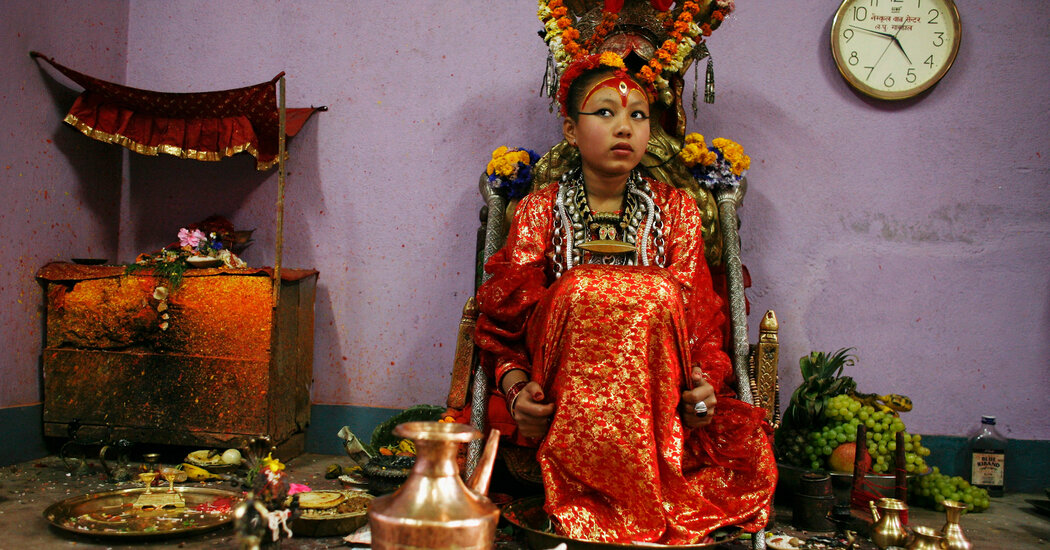 
PATAN, Nepal — When the 6-year-old goddess wept for four days, it was viewed as a terrible omen for Nepal, and her tears appeared to have foreshadowed a national tragedy.

On the last day of her crying, June 1, 2001, the crown prince of Nepal killed nine members of the royal family, including his parents, King Birendra and Queen Aishwarya, before shooting himself.

More than 20 years later, in a nondescript office in Patan, an ancient city a few miles from the capital, Kathmandu, that girl who had been worshiped as a goddess was now a woman concerned with more earthly matters: Chanira Bajracharya, a freshly minted M.B.A., was handling loan applications at the financial services firm where she works.

Her ability to land a corporate job has set her apart from most other former kumari, women who in their prepubescent youth were worshiped as the living embodiment of a Hindu goddess — but most of whom were denied education.

“People used to think because she’s a goddess, she knows everything,” said Ms. Bajracharya, 27. “And who dares to teach a goddess?”

She was speaking at the family home in Patan, where she had performed her divine duties for 10 years.

The walls of one room were covered with photographs of her in full kumari regalia, a small girl with brightly painted lips and eyes lined with kohl. In one photograph, she is looking down imperiously at the last king of Nepal, Gyanendra, the assassin’s uncle.

Her days were often spent receiving a long line of visitors, who would kneel at her tiny feet, which were never supposed to touch the ground outside. The devotees would place offerings of cash and fruit into brass bowls as, wordlessly, Chanira would stretch out an arm covered in red satin, smudging vermilion paste, a religious marker called a tika, on their foreheads as a blessing.

The institution of the kumari, which means “virgin” in Nepali, stretches back seven centuries. The tradition centers on the story of a Hindu goddess, Taleju, who gave counsel to a king.

At one meeting, he tried to sexually assault her, and she disappeared. He expressed such remorse that she told him that while she would never again reappear in her own body, he should worship a young girl, through whom the goddess would continue her kingly counsel.

Since the 14th century, girls as young as 2 have been chosen from Buddhist families from the Newar community living in the Kathmandu Valley.

A dozen children are bestowed the title of kumari at any one time, but only three, representing the three ancient kingdoms of the Kathmandu Valley, including Patan, observe the kumari lifestyle full-time. The other goddesses, Ms. Bajracharya said, are “just part-time.”

The kumari, Ms. Bajracharya said, act as a syncretic symbol between Hinduism and Buddhism, the largest faiths in Nepal, a country of about 30 million.

“Under Buddhist culture children are protectors,” said Chunda Bajracharya, a retired professor of the Newar language who is not related to the former kumari. “It’s our culture, tradition and a matter of pride,” she said.

Most kumari before Ms. Bajracharya, including her aunt, Dhana Kumari Bajracharya, received no formal education. Losing their divinity when they get their first period, many enter adulthood illiterate and struggle to find a life beyond the throne.

Ms. Bajracharya is working to change that, urging the current crop of young goddesses to study as she did, which she believes will not only help them, but also help shield an institution that critics argue deprives girls of their childhoods and human rights.

“It makes it easier to get back to the society after retiring,” she said. “It’s really hard being illiterate in this world.”

Ms. Bajracharya, who remains a staunch champion of the tradition, had favorable feelings about her unusual childhood.

And she rejected any notion that the role had violated her rights.

“People used to think that as a goddess, we have a very secluded life, we don’t get to speak with others, we don’t get time to play, we’re not allowed to smile,” she said. “All those myths that have been so popular, sometimes I get so irritated.”

Still, no one considers it an easy role.

Kumari are rarely allowed outside. During the dozen and a half times each year they do go out, for rituals or during Nepali Hindus’ festival season, they must be carried, either in a palanquin or in someone’s arms. They do not speak to strangers — and when in the throne room, do not speak to anyone, even family.

In exchange, they are afforded unparalleled respect. At the Indra Jatra festival, when the kumari of Kathmandu is driven in her chariot through the streets of the city, she reconfirms every year the head of state’s legitimate claim to power with a tika.

Because their emotions are perceived as a reflection of the nation’s well-being, as Ms. Bajracharya’s outburst before the royal massacre was, they must strive to remain passive during rituals.

Ms. Bajracharya’s reign as the living goddess of Patan, from 2001 to 2010, saw some of Nepal’s greatest political change, from the palace killings her tears were believed to have foretold, to the Maoist insurgency that intensified afterward. In 2008, Nepal abolished its 240-year-old monarchy and became a democratic republic.

That same year, Nepal’s Supreme Court ruled that the kumari tradition should be preserved but amended. It ordered the government to give kumari an educational allowance, in addition to the stipend and retirement pension they already received.

“Once girls did not study. Now all children study. So that freedom should be there for kumari,” said Udhav Man Karmacharya, the head priest at Taleju Temple in Kathmandu.

And that education did not interfere with Chanira’s divine duties, he noted.

“She was quite natural as a goddess,” he said.

Before Chanira was born, her mother, Champa Bajracharya, received a holy sign in a dream — a lotus flower falling from heaven into her womb. She went to a Buddhist priest, who interpreted the dream to mean that her child would be a pure soul who would “rebel from the world,” she said.

When it came time to deify a new young girl in Patan, all 150 families in the Ratnakar Mahavihar Hakhabahal community there, part of the Newar clan, were invited to bring their female children to an elaborate selection trial. The head priest performed tantric rituals asking Taleju to inhabit one of the children. An astrologer studied their charts.

“The one chosen by the goddess, she starts showing signs, she’s becoming more polite, her face appears red. Those physical changes, they happen. Everyone who is there can see she’s being possessed by the goddess,” Ms. Bajracharya said of what she remembers of that day when she was selected.

“The ones not chosen by the goddess cry, or walk away or run, or show some other unacceptable behavior that disqualifies them,” she added.

The finalists are examined by the priest’s wife for scars, birthmarks and other perceived defects. The girl with the highest number of 32 prescribed qualities — including eyes like a deer, and heart like a lion — becomes the next kumari, invested with the power of the goddess.

Kumari usually live sequestered away from their parents, raised by official caretakers. But Ms. Bajracharya stayed at home, as there was no special kumari house for her during her reign.

After she completed a typical day’s divine duties, she studied, played with her cousins and watched movies on a computer. No roughhousing, though — a childhood scrape could have cost her her divinity.

Her mother arranged for her to be tutored by a teacher from a nearby school.

Ms. Bajracharya, who stepped down at 15, still commands respect in the Newar community of Patan. And she mentors young goddesses, like her successor, 9-year-old Nihira Bajracharya, not related, who receives tutoring.

“We really need education to survive,” she said she told Nihira’s parents when the girl assumed the throne at 5. “Being a kumari can be a great responsibility, but apart from that she is also a normal girl, and she will have a life after her divine duties, and she needs every skill that is required to survive.”

Post-retirement life is notoriously difficult for many kumari. They can struggle to walk properly or speak above a whisper, after doing so little of both. A popular myth says any man who marries a kumari dies within a year, though many former kumari do wed.

Ms. Bajracharya’s own dating prospects have been affected by the myth, she said, having received fewer proposals for marriage than her peers.

But she has landed a much-coveted job with a foreign company, a subsidiary of Home Loan Experts, a mortgage brokerage based in Australia. Ms. Bajracharya believes it was her family’s modern adaptation of the traditional kumari lifestyle that enabled her to do so well, studying business administration at the prestigious Kathmandu University.

Few people at the office know that the new credit analyst spent her childhood worshiped by royalty and Nepal’s first president. On a recent Monday, she was just one of a dozen workers, mainly young women fresh from business school, eyes fixed on desktop computers, assessing Australian home loan applications from 6,000 miles away.

“As a kumari, I was not allowed to speak to many outsiders,” she reflected. From those days “to now being in a position where I have to communicate constantly with foreign clients, it’s been a journey,” she added. “And I really feel like I have so much more to learn.”