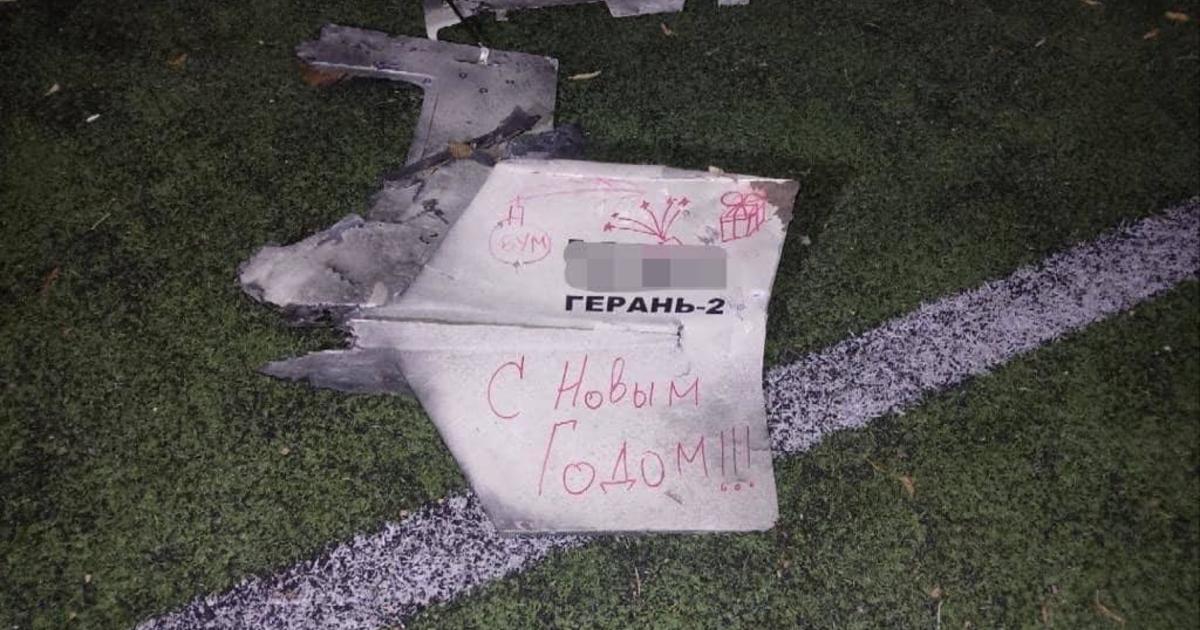 
A fresh aerial strike targeted Kyiv on Monday, after a New Year’s weekend marked by dozens of Russian strikes that killed at least five people. One of the drones fired by Russia had “Happy New Year” written on it in Russian, according to the city’s police chief.

The Ukrainian capital and other cities came under fire from missiles and Iranian-made drones on Saturday, killing four people, and a new attack Sunday killed one in the southern region of Zaporizhzhia.

Kyiv Police Chief Andriy Nebitov released a picture of the wreckage of a downed drone that featured the words “Happy New Year” in Russian. CBS News could not independently verify the authenticity of the image.

“That is everything you need to know about the terror state and its army,” he wrote.

“A cynical greeting from Russian terrorists on the wreckage of the drone that the Russians used to attack Kyiv region on New Year’s Eve,” the post said.

Kyiv was once again rocked by an air raid in the early hours of Monday morning, with the city’s military administration ordering residents to seek shelter just after 1 a.m.

Air defenses managed to shoot down 41 drones and a missile, officials said, adding that the attack had again targeted energy facilities.

The power company Ukrenergo said the situation with the electricity supply in Kyiv was now “more complicated.”

“That is why emergency shutdowns are now in effect,” it said on social media.

“An injured 19-year-old man was hospitalised in the Desnyanskyi district of the capital,” he said. Authorities later said he was hit by the falling debris.

“Russia no longer has any military goals and is trying to kill as many civilians as possible and destroy more civilian facilities,” Mykhailo Podolyak tweeted. “A war to kill.”

In Russia, officials on Monday said a Ukrainian drone had struck an energy facility in the Bryansk region, which borders northern Ukraine. Bryansk regional governor Alexander Bogomaz said on Telegram that the strike had cut off electricity to a village.

Officials in another region also reported a Ukrainian reconnaissance drone being shot down near the city of Voronezh, some 180 kilometres from the Ukrainian border.

Kyiv has a policy of not claiming responsibility for such raids.

Russia claims “historical rightness is on our side”

On Saturday, Russian artillery hit the village of Naddniprianske, outside the southern Ukrainian city of Kherson, severely wounding a 13-year-old boy. Then it struck the hospital where the boy was lying in intensive care, smashing the windows.

“What did the 13-year-old boy do to these inhumans that they tried to kill him twice?” governor Yaroslav Yanushevych said on messaging app Telegram.

The Russian onslaught damaged the Kherson hospital and also left the city and the surrounding settlements without electricity.

Russian forces in November withdrew from Kherson, the only regional capital held by Moscow, but have continued to batter the city.

Ukrainian governors and officials also reported one death each in Orikhiv in the Zaporizhzhia region, in the capital Kyiv, in the southern region of Kherson and in the western city Khmelnytskyi.

Dozens of people were also wounded, they said.

After suffering a series of humiliating battlefield defeats, Moscow started to target electrical and other critical infrastructure in October. The strikes have caused sweeping blackouts and cut off water supplies and heating to civilians as the temperature in some regions dropped below freezing.

But Putin declared during his midnight address on New Year’s Eve that “moral, historical rightness is on our side.”

“The plans of the Kyiv regime to carry out terror attacks against Russia in the near future have been thwarted,” Russia’s defense ministry said.

Russia has accused Ukraine of targeting its domestic military sites and infrastructure.

In December, Moscow said it had shot down drones three separate times over Engels airfield, an airbase in southern Russia more than 370 miles from Ukraine.

Another base in Russia’s Ryazan region also saw attacks from Ukraine’s drones in early December, according to Moscow, killing three people.