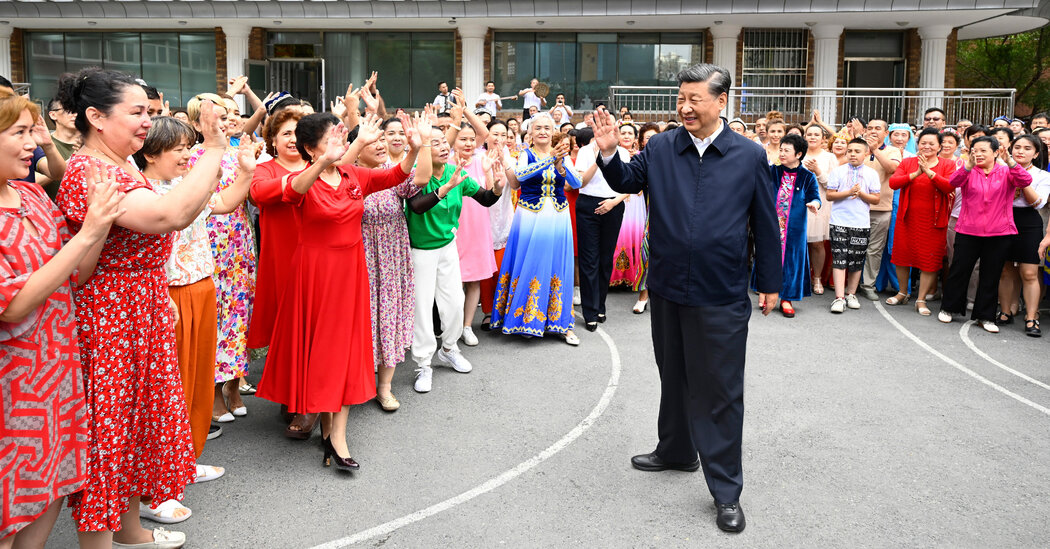 
China’s leader, Xi Jinping, made his first visit to the western region of Xinjiang since he unleashed a campaign of mass detentions of Uyghurs there. His trip amounted to a proclamation of success in his yearslong effort to quell ethnic resistance, in spite of international condemnation.

Mr. Xi’s four-day visit that ended Friday focused on projecting that Xinjiang had become united and stable under his leadership. After his last visit in 2014, Mr. Xi set in motion drastic policies — widespread arrests, surveillance, indoctrination and labor transfers — to press the region’s Uyghurs and other largely Muslim ethnic groups to identify as members of one Chinese nation loyal to the Communist Party.

“Every ethnic group in Xinjiang is an inseparable member of the great family of Chinese nationhood,” Mr. Xi said while visiting a heavily Uyghur neighborhood of Urumqi, the regional capital of Xinjiang, Xinhua news agency reported. His published remarks did not mention eradicating “extremism” and “separatism,” which officials have long cited as the rationale for the party’s severe policies.

“We must particularly treasure the excellent conditions of stability and unity,” Mr. Xi said.

Chinese state media also showed Mr. Xi waving at cheering crowds of Uyghur and Han residents; speaking to students standing to attention in the region’s main university; and admiring cotton grown by the Xinjiang Production and Construction Corps, a quasi-military conglomerate whose products have been banned by the United States as tainted by coercion and forced labor. He wore a cowboy hat and dark sunglasses as he toured ancient ruins on the outskirts of Turpan, a city in northern Xinjiang surrounded by desert.

“It suggests that the party is obviously very confident in what it has achieved in Xinjiang,” said Michael Clarke, a senior fellow with the Center for Defense Research at the Australian Defense College who researches Xinjiang. “They have ensured security and ‘stability,’ and they are well on their way toward accomplishing their longer-term objective, which is cultural assimilation.”

The visit comes just two weeks after Mr. Xi made a rare trip to Hong Kong, his first since the huge, and at times violent, protests there in 2019. During his visit, on the 25th anniversary of Hong Kong’s return to Chinese rule, Mr. Xi claimed vindication for the hard-line measures he had taken to subdue the pro-democracy opposition and cement Chinese control over the once-freewheeling city.

Mr. Xi’s back-to-back visits are part of an increasingly intense effort to extol his policies before a Communist Party congress this fall, where he appears set to take a third five-year term as the party general secretary.

Ahead of the political congress, the party wants to maintain nationwide stability. But it is grappling with a sharp slowdown in the economy, partly brought on by Mr. Xi’s stringent controls against Covid outbreaks. The party’s media apparatus has used the visits to Hong Kong and now Xinjiang to present Mr. Xi as a confident, paternal authority, dominant even in once-turbulent regions on China’s periphery.

Rayhan Asat, a lawyer in the United States whose younger brother is imprisoned in Xinjiang, said Mr. Xi’s comments were disconnected from the harsh reality on the ground.

“Photo ops with smiling Uyghurs hardly change the evidence that innocent Uyghurs continue to be imprisoned,” Ms. Asat said. “The ‘China Dream’ cannot be achieved while an ethnic group is subject to an apartheid regime and locked up for its race,” she said, referring to Mr. Xi’s vision for a rejuvenated, powerful nation.

Relations between many Uyghurs and China’s Han majority have often been tense since Communist Party-led forces took control of the region in 1949. Uyghurs make up 45 percent of Xinjiang’s 26 million residents, while Han count for 42 percent, according to 2020 census numbers. Uyghurs are a Turkic group whose language, culture and Muslim heritage share many affinities with Central Asian nationalities. They have long complained of job discrimination, as well as tight restrictions on religion and the use of Uyghur language.

Mr. Xi made his previous visit to Xinjiang eight years ago, when he was still developing hard-line policies to extinguish Uyghur discontent and outbursts of violence that had worsened since deadly riots in 2009 in Urumqi, the regional capital. Nearly 200 residents were killed by Uyghur assailants in those riots, Chinese news reports said at the time. Uyghur groups abroad said many Uyghurs killed by security forces or vigilantes were not included in China’s count.

Weeks before Mr. Xi’s 2014 visit, Uyghur militants had stabbed more than 150 people at a train station in southwest China, killing 31. On the last day of Mr. Xi’s 2014 visit, the regional capital, militants detonated a bomb in Urumqi, killing one bystander and injuring dozens of others, an event that reinforced Mr. Xi’s demands to redouble control over Xinjiang.

A 2019 investigation by The New York Times, based on hundreds of pages of leaked internal documents, showed that it was during and after that 2014 visit that Mr. Xi laid the groundwork for the crackdown, calling in a series of secret speeches for an all-out “struggle against terrorism, infiltration and separatism” using the “organs of dictatorship,” and showing “absolutely no mercy.”

Mr. Xi’s demands set in motion a wave of repressive measures across Xinjiang. Experts have estimated that from 2017, as many as 1 million Uyghur, Kazakhs and other members of Central Asian ethnic groups were put in prisons and internment camps. There they underwent indoctrination aimed at turning them into secular, patriotic supporters of the party.

The authorities also put the region under tight surveillance, destroyed mosques and shrines, sent residents to work in factories, stepped up birth control measures for Muslim women and placed children in boarding schools.

In May, the BBC and a researcher, Adrian Zenz, published leaked photos and documents from Xinjiang that showed Uyghurs being detained and imprisoned for acts such as refusing to drink alcohol or “growing a beard under the influence of religious extremism.”

As the evidence of Beijing’s draconian actions in Xinjiang has mounted, the Chinese government has come under condemnation from rights groups, Western governments and Uyghur activists abroad.

The State Department has accused China of committing genocide against Uyghurs and other mostly Muslim groups, and have put sanctions on Chinese officials, companies and government agencies involved in Xinjiang. In June, a new law went into effect in the United States aimed at banning Chinese forced labor by barring products from Xinjiang unless companies can prove that forced labor was not involved.

“Anytime you use a trade measure like this one, you don’t expect that in the very short term it’s going to completely change the government’s actions,” Thea Lee, the U.S. Department of Labor’s deputy under secretary for International Labor Affairs, said in a telephone interview this month about the law. But, she added, “it sends a very strong message to the Chinese government that this kind of activity is completely unacceptable.”

China has rejected the criticism, arguing that its policies have helped reduce poverty and extremism in one of the country’s least economically developed regions. Xinjiang, Mr. Xi said during his visit, “must accelerate high-quality economic development” and improve job creation.

He was accompanied in Xinjiang by Ma Xingrui, the Communist Party secretary of the region who was installed late last year, replacing Chen Quanguo, who enforced the most draconian phase of the government’s mass detentions. Since taking office, Mr. Ma has promoted industrial development in Xinjiang, while retaining a focus on security. During his visit, Mr. Xi described Xinjiang as a “hub” in China’s Belt and Road Initiative, a push to expand global commercial and geopolitical ties through infrastructure and port projects.

“I wouldn’t go as far as to say it’s drawing a line under the hard, repressive elements in Xinjiang,” said Mr. Clarke, the Australian Defense College researcher. “But the renewed emphasis over the last year and a half on the economic aspects suggests an implicit recognition that the repressive apparatus in Xinjiang, including the re-education camps, have had a negative impact on the region’s economy.”