Biden walks along U.S.-Mexico border in trip to Texas 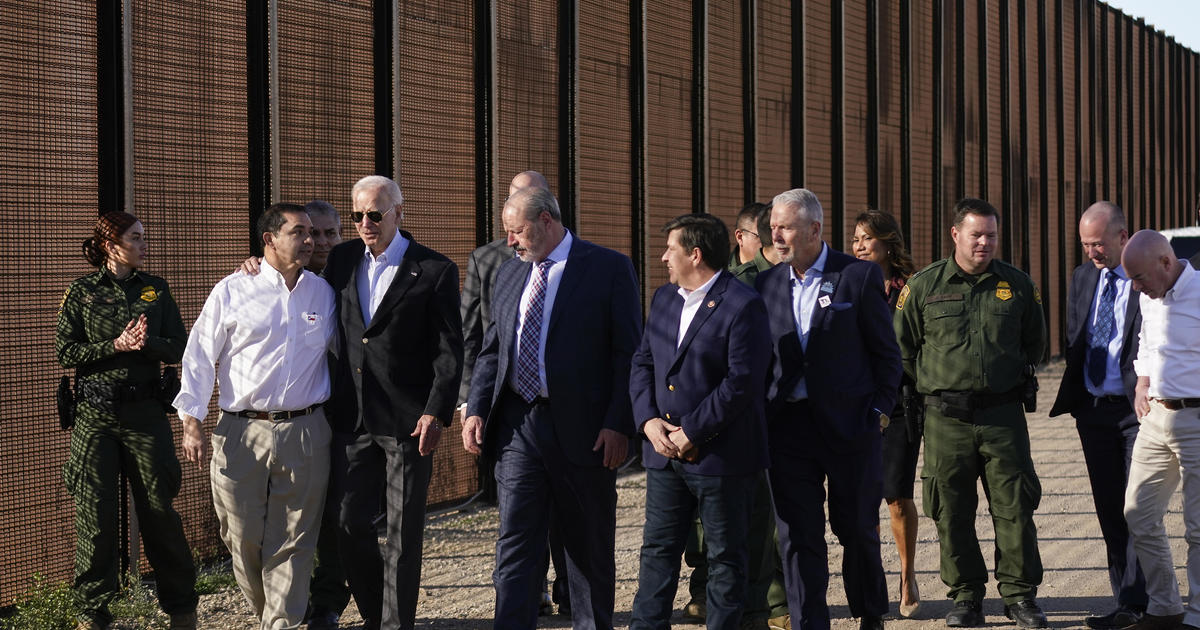 
Washington — President Biden visited the U.S.-Mexico border on Sunday, his first trip there as president after two years of hounding by Republicans who have hammered him as soft on border security while the number of migrants crossing spirals.

In El Paso, Texas, Mr. Biden visited a migrant center and walked along a stretch of the border wall. He was accompanied by Homeland Security Secretary Alejandro Mayorkas, several Democratic members of Congress from the area, the mayor of El Paso and several local heads of charitable organizations.

Mr. Biden was greeted upon landing by Texas’ Republican Governor Greg Abbott, who passed a letter to Mr. Biden that Abbott said outlined five ways he can address the border crisis. Abbott, who has called for Mr. Biden and Vice President Kamala Harris to visit the border, told reporters that he thought it was “this being the president’s first visit to the border, after being in office for two years, is that it is stunning and astonishing, and outrageous.”

El Paso, located on the southwestern edge of Texas, is currently the biggest corridor for illegal crossings, due in large part to Nicaraguans fleeing repression, crime and poverty in their country. They are among migrants from four countries who are now subject to quick expulsion under new rules enacted by the Biden administration in the past week.

The president was expected to meet with border officials to discuss migration as well as the increased trafficking of fentanyl and other synthetic opioids, which are driving skyrocketing numbers of overdoses in the U.S.

“The president’s very much looking forward to seeing for himself firsthand what the border security situation looks like,” said John Kirby, White House national security spokesman, prior to Mr. Biden’s arrival. “This is something that he wanted to see for himself.”

Mr. Biden’s announcement on border security and his visit to the border are aimed in part at quelling the political noise and blunting the impact of upcoming investigations into immigration promised by House Republicans. But any enduring solution will require action by the sharply divided Congress, where multiple efforts to enact sweeping changes have failed in recent years.

“All of these executive branch efforts really are just temporary band-aids, whether it’s Title 8, whether it’s Title 42, if we need to make sure that Congress acts,” Rep. Veronica Escobar, a Democrat from Texas who is joining Mr. Biden in El Paso, told “Face the Nation.”

Escobar said she has “hit a brick wall” from Republicans and Democrats when trying to implement legislative changes to address border issues.

“The executive branch is not the only branch of government that needs to do its job,” she said.

Republican Sens. Lindsey Graham of South Carolina and John Cornyn of Texas offered faint praise for Mr. Biden’s decision to visit the border, and even that was notable in the current political climate.

“He must take the time to learn from some of the experts I rely on the most, including local officials and law enforcement, landowners, nonprofits, U.S. Customs and Border Protection’s officers and agents, and folks who make their livelihoods in border communities on the front lines of his crisis,” Cornyn said.

From Texas, Biden traveled south to Mexico City, where he and the leaders of Mexico and Canada will gather on Monday and Tuesday for a North American leaders summit. Immigration is among the items on the agenda. Mexican President Andres Manuel Lopez Obrador met Biden at the airport Sunday night and joined him in the presidential limousine for the ride to Biden’s hotel.

In El Paso, where migrants congregate at bus stops and in parks before traveling on, border patrol agents have stepped up security before the president’s visit.

“I think they’re trying to send a message that they’re going to more consistently check people’s documented status, and if you have not been processed they are going to pick you up,” said Ruben Garcia of the Annunciation House aid group in El Paso.

Migrants and asylum-seekers fleeing violence and persecution have increasingly found that protections in the United States are available primarily to those with money or the savvy to find someone to vouch for them financially.

Jose Natera, a Venezuelan migrant in El Paso who hopes to seek asylum in Canada, said he has no prospects for finding a U.S. sponsor and that he’s now reluctant to seek asylum in the U.S. because he’s afraid of being sent to Mexico.

Mexico “is a terrible country where there is crime, corruption, cartels and even the police persecute you,” he said. “They say that people who think about entering illegally won’t have a chance, but at the same time I don’t have a sponsor. … I came to this country to work. I didn’t come here to play.”

The number of migrants crossing the U.S.-Mexico border has risen dramatically during Mr. Biden’s first two years in office. There were more than 2.38 million stops during the year that ended Sept. 30, the first time the number topped 2 million. The administration has struggled to clamp down on crossings, reluctant to take hard-line measures that would resemble those of the Trump administration.

The policy changes announced this past week are Mr. Biden’s biggest move yet to contain illegal border crossings and will turn away tens of thousands of migrants arriving at the border. At the same time, 30,000 migrants per month from Cuba, Nicaragua, Haiti and Venezuela will get the chance to come to the U.S. legally as long as they travel by plane, get a sponsor and pass background checks.

The U.S. will also turn away migrants who do not seek asylum first in a country they traveled through en route to the U.S.

The Biden administration will allow migrants in central and northern Mexico to schedule appointments to seek asylum at a U.S. port of entry through a cell phone app, CBP One.

Escobar, the Texas congresswoman, said most of the migrants fleeing their home countries have cellphones, as it is how they communicate with each other and family at home, but she called on other aspects of the U.S. government to take more action.

“We do need far more robust State Department involvement, especially for those who do not have access to that kind of technology. We need far greater education,” she said. “Many of the refugees that I have spoken to, especially over the last couple of weeks, have no concept of what the asylum process is. Their idea is I’m going to go to the border, I’m going to get a job. And I’m going to help my family, something all of us would do, of course. So there’s a lot of work that needs to be done.”

Homeland Security Secretary Alejandro Mayorkas told reporters aboard Air Force One that the administration is trying to “incentivize a safe and orderly way and cut out the smuggling organizations,” saying the policies are “not a ban at all” but an attempt to protect migrants from the trauma that smuggling can create.

The changes announced by the president were welcomed by some, particularly leaders in cities where migrants have been massing. But Mr. Biden was excoriated by immigrant advocate groups, which accused him of taking measures modeled after those of the former president.

“I do take issue with comparing us to Donald Trump,” said White House press secretary Karine Jean-Pierre, pointing to some of his most maligned policies, including the separation of migrant children from their parents.

“This is not that president,” she said.

For all of his international travel over his 50 years in public service, Mr. Biden has not spent much time at the U.S.-Mexico border.

The only visit that the White House could point to was his drive by the border while he was campaigning for president in 2008. He sent Vice President Kamala Harris to El Paso in 2021, but she was criticized for largely bypassing the action, because El Paso wasn’t the center of crossings that it is now.

President Barack Obama made a 2011 trip to El Paso, where he toured border operations and the Paso Del Norte international bridge, but he was later criticized for not going back as tens of thousands of unaccompanied minors crossed into the U.S. from Mexico.

Trump, who made hardening immigration a signature issue, traveled to the border several times. During one visit, he crammed into a small border station to inspect cash and drugs confiscated by agents. During a trip to McAllen, Texas, then the center of a growing crisis, he made one of his most-often repeated claims, that Mexico would pay to build a border wall.

“NO,” Enrique Peña Nieto, then Mexico’s president, tweeted in May 2018. “Mexico will NEVER pay for a wall. Not now, not ever. Sincerely, Mexico (all of us).”