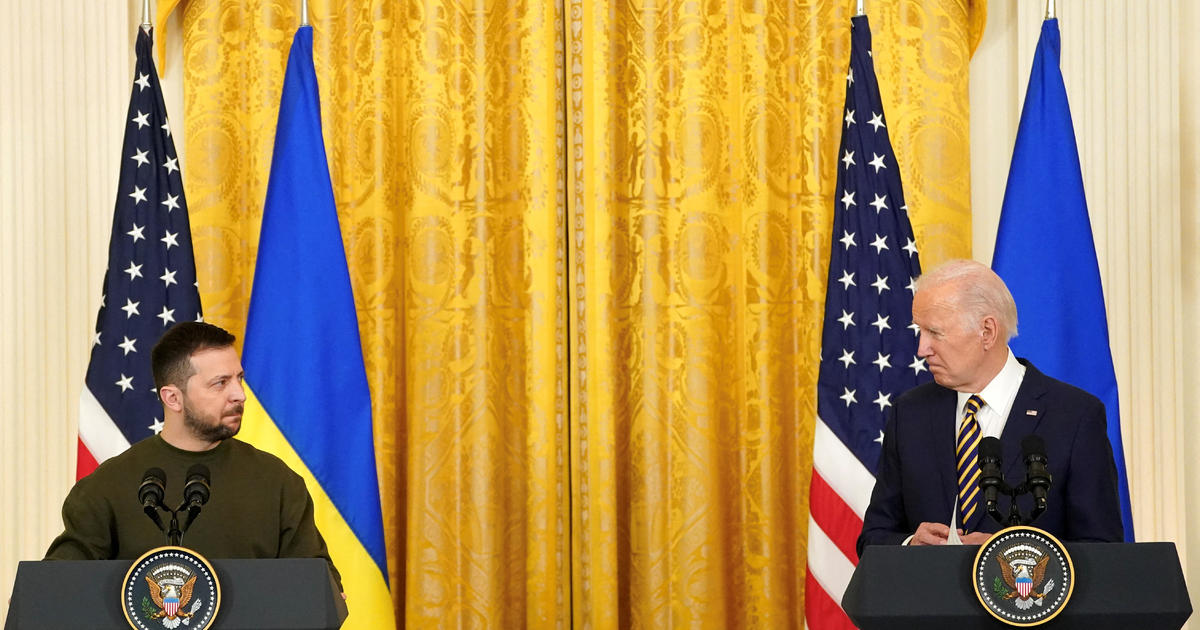 At a press conference, the U.S. president said he would continue to support Ukraine “as long as it takes,” and denounced Russian attacks on Ukrainian infrastructure as the brutal winter cold sets in.

“We should be clear about what Russia is doing — it is purposefully attacking Ukraine’s critical infrastructure, destroying the systems that provide heat and light to the Ukrainian people during the coldest, darkest part of the year. Russia is using winter as a weapon,” Mr. Biden said, standing next to Zelenskyy in the White House East Room. “It’s important for the American people and for the world to hear directly from you, Mr. President, about Ukraine’s fight and the need to continue to stand together through 2023.”

Asked what message he had for the American people, Zelenskyy emphasized that “we have the same values.”

“We really fight for our common victory against this tyranny. And that is real life. And we will win. And I really want [to] win together. Not want — I am sure,” said Zelenskyy, who alternated between speaking in English and Ukrainian.

Zelenskyy’s visit to Washington was his first known trip outside Ukraine in the 300 days since the Russian invasion began. Mr. Biden rolled out the red carpet for his Ukrainian counterpart, who wore a now-familiar uniform consisting of an olive-green sweatshirt, cargo pants and boots. The two first held a meeting in the Oval Office, where Mr. Biden said the U.S. “stands with the great people of Ukraine” and called Zelenskyy a “great leader.”

After his meetings at the White House, Zelenskyy left for Capitol Hill, where he was set to meet with congressional leaders and address a joint meeting of Congress.

The trip came together just within the last week, and the plans were cloaked in secrecy given the extraordinary security concerns that come with a wartime leader traveling outside his country.

Sitting in the Oval Office, Zelenskyy said it was a “great honor” to be welcomed to the White House, and expressed his appreciation “from my heart, from the hearts of Ukrainians, all Ukrainians” for Mr. Biden’s “support and leadership.”

In a moment that seemed to catch Mr. Biden off guard, Zelenskyy presented him with a combat medal that a Ukrainian captain fighting on the front lines had given him. “He’s very brave, and he said, ‘Give it to a very brave president,'” Zelenskyy said, noting that the captain commands a unit using a weapons system provided by the U.S.

Shortly before Zelenskyy arrived, the State Department unveiled a new military aid package for Ukraine worth $1.85 billion, bringing the total military aid sent to Ukraine to $22 billion. In a first, the U.S. is sending the Ukrainians a Patriot missile battery, a sophisticated air defense system that can repel Russian missiles and aircraft. The new package also includes hundred of thousands of mortars and artillery shells, dozens of armored vehicles and specialized kits that greatly enhance the effectiveness and accuracy of bombs dropped from fighter jets.

“We’re going to continue to strengthen Ukraine’s ability to defend itself, particularly air defense,” Mr. Biden said. “And that’s why we’re going to be providing Ukraine with a Patriot missile battery and training your forces to be able to accurately use it.”

The Ukrainian president’s speech to Congress comes as U.S. lawmakers work to pass a sweeping $1.7 trillion government spending package that includes nearly $45 billion in military, humanitarian and economic assistance for Ukraine. If approved by Congress, it would be the latest tranche of emergency assistance provided to Ukraine.

Lawmakers have allocated more than $65 billion in total aid, which includes financial and humanitarian assistance, to Ukraine since the invasion, though some House Republicans have expressed opposition to continuing direct funding to the country. The new funding would bring U.S. assistance to over $100 billion.