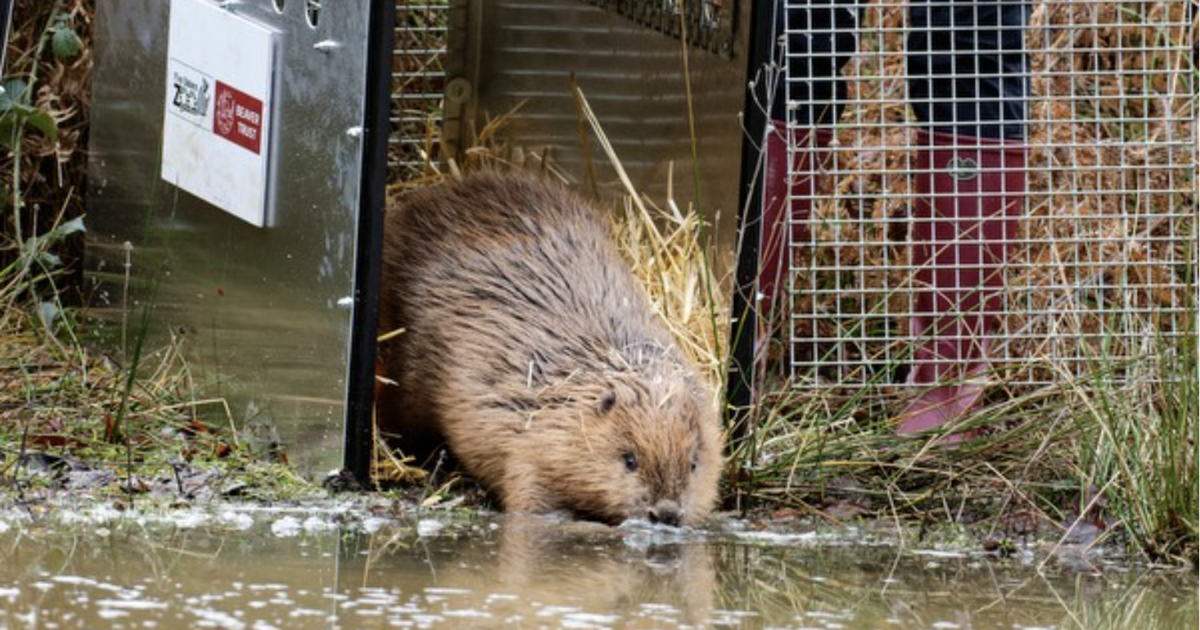 
Eurasian beavers used to run rampant, but by the 16th century, humans hunted the species to extinction in numerous countries, including the United Kingdom. Now, the U.K. is working to bring the species back.

On Monday, two beavers named Hazel and Chompy were released into an enclosed area in the southern English county of Hampshire. According to the Hampshire and Isle of Wight Wildlife Trust, their release is a “truly historic event,” as it marks the first time in 400 years that beavers are in the area. They were extinct for centuries in many parts of the continent after being “hunted to extinction for their fur, meat and scent-glands (used for making perfume),” according to the charity.

The beavers were released onto a 925-acre property known as the Ewhurst estate, according to the BBC, with hopes that they will one day breed. The land’s owner, Malaysian actress and model Mandy Lieu, said she was “thrilled” to be part of the species’ re-establishment.

“It has been a very rewarding journey learning about what beavers need, how they will impact the environment around them and the benefits that they will bring to other animals and plants,” she said.

That journey seems to have been successful, with the Trust saying that the beavers made “themselves at home immediately” upon release.

The rodent is known as a keystone species, meaning that other species and ecosystems largely depend on the animals’ ability to thrive. The animals have been protected by the U.K. government since last autumn, and their release is part of the efforts to restabilize their populations.

“These beavers will, in time, improve the health of the ponds there by altering the habitat and trapping sediment which is currently running off the land and making the water turbid,” the Trust said on Monday. “They will create more diversity in the habitats and in turn, wetland wildlife will flourish.”

It’s believed that the animal will not only improve the health of local ecosystems but can also help in the fight against climate change.

The Wildlife Trust said that beavers help create pools of water and restore wetlands, both of which capture carbon. That carbon, taken in from the atmosphere, is stored in the vegetation built up in those bodies of water as well as the sediments.

A 2021 study explains that freshwater sources, namely rivers and streams, are “important drivers of the carbon cycle, transporting and depositing carbon rich material downstream, depositing on floodplains, in estuaries and out to sea.” Standing water such as lakes and ponds can also “bury considerable amounts of carbon long-term.”

“Creating new ponds and restoring those neglected could help sequester more carbon and be readily integrated with other land uses,” the study says, adding, however, that those bodies of water need to be maintained as they can easily switch to becoming sources of atmospheric carbon if they dry out.

“And [beavers] do this all for free,” the Wildlife Trust says. “…Beavers can also offer a nature-based solution to improving the health and function of river catchments. The beaver-created wetlands can act as sponges which can capture organic sediments, and reduce the effects of agricultural runoff and harmful chemicals such as pesticides, which in turn helps to improve water quality downstream.”

Roisin Campbell-Palmer, head of restoration at the Beaver Trust, said that the group is “really pleased” about this start to the restoration process, but that there is still more work to do.

“We are working towards their continued return to the wild, with appropriate licensing and management frameworks, but in the meantime enclosures such as the one here at Ewhurst remain an important part of the restoration story,” Campbell-Palmer said. “We’re delighted to be bringing beavers here today.”