Australia Shifts Its Tone at the Pacific Islands Forum 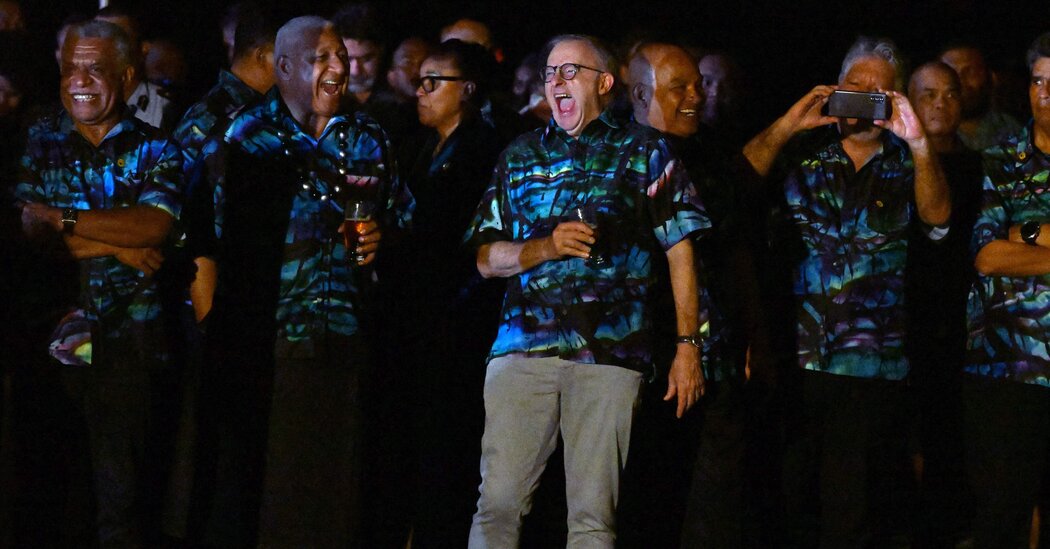 
The Australia Letter is a weekly newsletter from our Australia bureau. Sign up to get it by email.

By many accounts, the Pacific Islands Forum was a success for Australia. Prime Minister Anthony Albanese was full of assurances when he assessed his meetings with island leaders earlier this week.

Australia’s influence had been “enhanced” by the meetings, Mr. Albanese said. While he did not explicitly say what effect the week would have on China’s influence in the region, his message was clear: “These things are all relative by definition. If Australia’s increasing our influence, then that has an impact.”

He hugged it out with the Solomon Islands prime minister, Manasseh Sogavare, who in his first interview since the signing of a security agreement with China earlier this year, promised that there would be no Chinese military base in his country. Pacific Island leaders embraced the new Labor government’s more ambitious plan to cut emissions, with a target of a 43 percent reduction by 2030.

On Wednesday, U.S. Vice President Kamala Harris gave a virtual speech announcing a new Pacific strategy — including opening embassies in Kiribati and Tonga, the reinstatement of the Peace Corps in the region, sending an American envoy to the forum and increasing funds for fishing assistance in the region.

“We recognize that in recent years, the Pacific Islands may not have received the diplomatic attention and support that you deserve,” she said. “So today I am here to tell you directly: We are going to change that.”

It’s a clear shift in tone for Australia and the United States, which have been criticized for being dismissive and neglectful of the region. It also reflects the significance of the Pacific as an increasingly assertive China projects its power in the region. Another testament to the region’s growing importance: this year’s meeting drew the biggest news media contingent yet, said journalists and academics who regularly cover the forum.

But have Australia and the United States done enough to mend relations in the region?

“I think they’ve certainly shifted things in their favor somewhat,” said Wesley Morgan, a Pacific expert with the Climate Council and adjunct professor at Griffith University, who attended the forum. But it will take time to see how this week’s moves play out, he added, with the forum’s final communiqué still to come.

Reports that the forum is expected to declare a Pacific climate emergency are a far cry from the last in-person meeting, in 2019, when former Prime Minister Scott Morrison fought with island nation leaders to water down climate change language.

But “Pacific Island countries will continue to press Anthony Albanese to commit more,” Dr. Morgan said. He noted that Prime Minister Frank Bainimarama of Fiji, the forum’s chair, made pointed remarks that he was looking for Australia to align its climate policies with the goal of limiting global warming to 1.5 degrees Celsius — which Australia’s current emissions targets fall well short of.

Pacific Island nations “are well aware of their increasing leverage in a context of sharpening geostrategic competition, and certainly will be looking to secure their national interest,” Dr. Morgan added.

Experts have noted that although the American announcements were well received by Pacific Island leaders, the United States has a long history of making promises to the region but failing to deliver.

Unless island nations are “equal partners in any negotiations related to how the U.S. and its partners conduct their activities in the region, the island states are unlikely to support these overtures,” wrote Anna Powles, a lecturer at Massey University, and Joanne Wallis, a professor at Adelaide University. “And China’s presence means that they have other options.”

Now for this week’s stories: