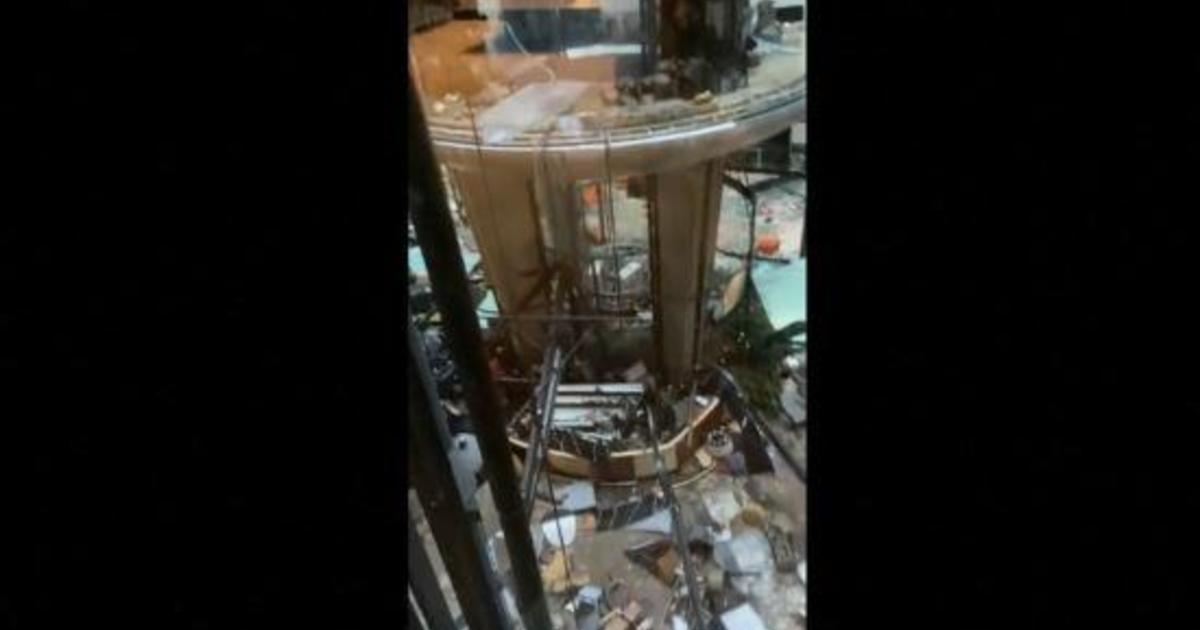 
Berlin — The huge saltwater aquarium burst open Friday morning without any immediate explanation, spilling almost 265,000 gallons of water and 1,500 fish onto the floor of a business and leisure complex in a busy district of Germany’s capital. Police and fire department officials said two people were injured by shards of glass and the explosive force of the aquarium’s failure sent parts of the building’s facade flying onto the street outside.

Police said they were alerted to a loud noise in Berlin’s Mitte district at around 5:45 a.m. local time (11:45 p.m. Eastern on Thursday). The fire department was alerted by an automatic alarm in the DomAquarée complex, which houses various businesses including a Radisson Blu hotel, at the same time.

The huge volume of water in the “Aqua-Dom,” the enormous, cylindrical tank situated directly over a bar in the lobby, put sufficient force behind the tank’s failure to send debris flying “abruptly” in all directions, police said.

“The water of the aquarium leaked almost completely, both in the building and onto the streets,” they said, adding that there was no indication of sabotage or any attack on the aquarium, and the cause of the failure remained unclear.

The fire department deployed about 100 personnel to the scene, along with about as many police officers, to establish a cordon and keep people away as water swamped the area. Much of the water flowed into street drains quickly, however.

All guests from the Radission Blu hotel, which sits in the floors above the DomAquarée lobby, were eventually evacuated.

Officials were assessing the stability and safety of the building, which sustained significant damage on the ground floor.

The large aquarium has long been a tourist attraction in Berlin, billed by the operators as the “largest cylindrical free-standing aquarium in the world.”

The tank itself was 52 feet high and almost 38 feet in diameter, made of acrylic glass. Visitors could ride an elevator right up through the middle of the aquarium.

Around 1,500 saltwater fish of more than 100 different species lived in the tank. The aquarium was reportedly extensively modernized in the summer of 2020.