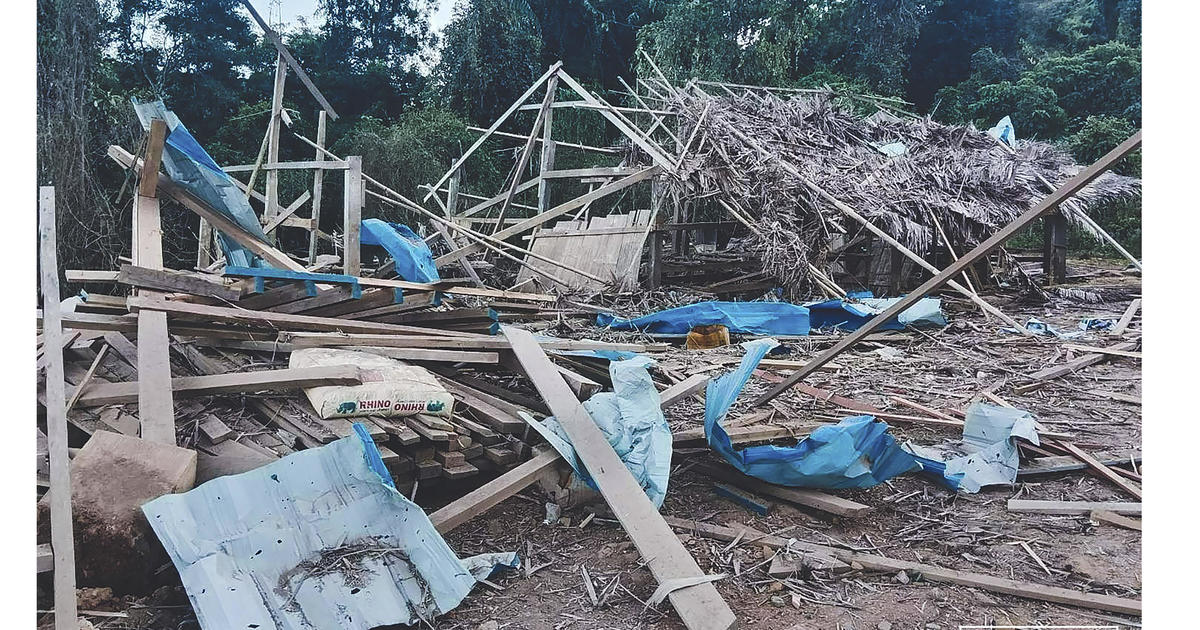 
Bangkok — Airstrikes by Myanmar’s military on two villages inhabited largely by ethnic Karen killed five civilians, including a mother and her 2-year-old daughter, and destroyed two churches, two relief organizations said Friday. The dead from the airstrikes on Thursday also included the pastor of a Baptist church, a Catholic deacon and a church layman, according to the Karen Women’s Organization and the Free Burma Rangers. Another woman and her child were wounded in a second village, they said.

The Karen, who live largely in the eastern part of Myanmar along the border with Thailand, are one of the most established ethnic minority rebel forces and have been fighting for decades for greater autonomy from the central government. Fighting increased after February 2021, when the army seized power from the elected government of Aung San Suu Kyi.

The military used deadly force to suppress peaceful protests against its takeover, which triggered armed resistance by pro-democracy forces that joined hands with some of the ethnic rebel groups, including the Karen. The military-installed government then launched offensives in the countryside to try to secure territory using airstrikes and burning villages.

The National Unity Government, an underground group that calls itself the country’s legitimate government and serves as an umbrella organization for opponents of military rule, said in a statement this week that since the army takeover, “460 innocent civilians, mostly children, have lost their lives due to (the military’s) repeated airstrikes.”

The Free Burma Rangers said their volunteers watched from a distance as jets made two bombing runs on Thursday over Lay Wah, one of the attacked villages in Karen state’s Mutraw district, also called Papun. They said the volunteers arrived after dark at Lay Wah, where the five people died and the churches were destroyed.

“The first thing we saw on the end of the village was a buffalo with half the front leg torn off stumbling around in agony and we saw shrapnel-damaged homes and roofs blown off,” the group said in a statement.

The other bombed village was Paw Khee Lah, where a woman and child were wounded, according to the Karen women’s group.

Because Karen villagers have become accustomed to living with war, they conduct many daily activities, such as schooling, in the jungle. The statement from the Free Burma Rangers said that if students had been in their village classroom, they would all have died because the structure was completely destroyed.

The bombing in Karen state was the second reported air offensive by the Myanmar military this week. On Tuesday and Wednesday in western Myanmar’s Chin state, military planes bombed the headquarters of the Chin National Front, another ethnic rebel militia closely linked to the country’s pro-democracy movement.

Five members of the Chin National Army were killed on Tuesday, Salai Htet Ni, a spokesperson for the Chin National Front, said in a text message. Wednesday’s bombing damaged a clinic and other buildings in the camp, he said.

The resistance forces in Myanmar have been able to prevent the military from taking firm control of large areas of the country, but have a great disadvantage in weapons, particularly in countering air attacks. Many Western nations already have imposed arms embargoes on the military government, but activists also advocate banning or limiting the sale of aviation fuel to Myanmar to cripple the military’s advantage in air power.