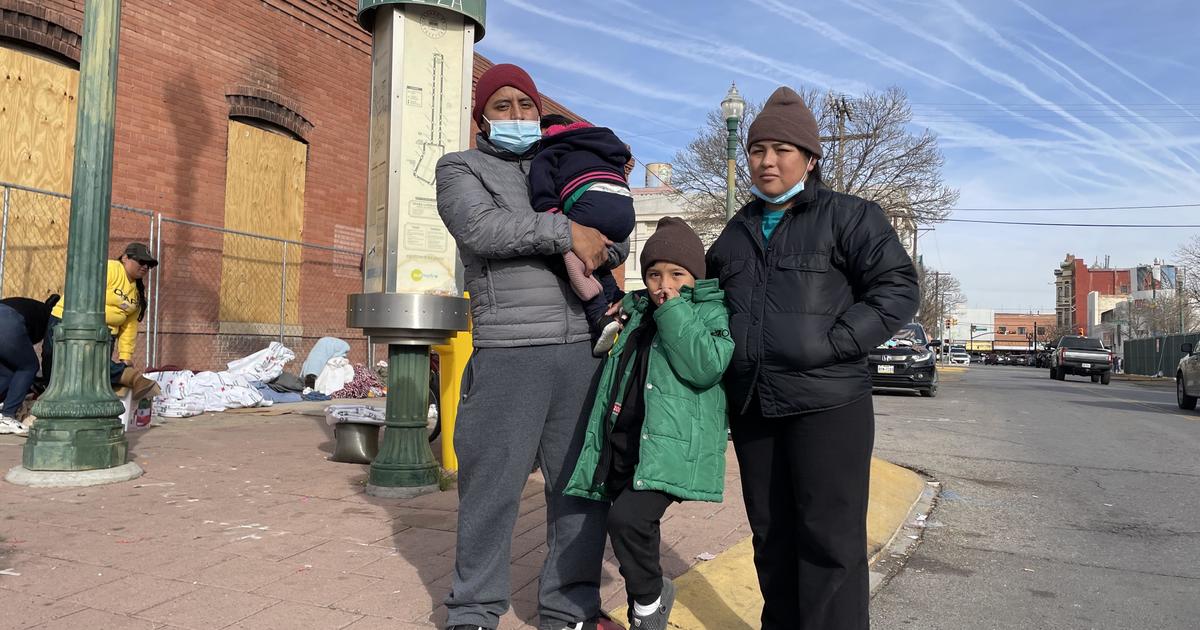 
El Paso, Texas — A black S.U.V. stopped near the Greyhound bus station in this border city to deliver winter clothing to dozens of assembled migrants. Then, a red truck showed up carrying watermelon and other fruit for the migrants, many of whom had slept on nearby streets the night before.

Later in the day, a police car arrived with boxes of pizza. Some hungry migrants rushed to get a slice. Others continued to lie or sit on blankets and cardboard boxes. Young parents made sure their children selected donated jackets, gloves and boots to brave the plummeting temperatures in Texas’ westernmost corner.

The migrants hailed from nations across Latin America, from Cuba, the Dominican Republic and Nicaragua, to Colombia, Ecuador and Venezuela. Many were there to collect food and supplies. Others were waiting for a bus to take them to cities across the U.S. Some were simply looking for a place to sleep.

The food, clothing and supplies distributed by local volunteers and officials throughout the day illustrated El Paso’s long history of welcoming and helping migrants and refugees. But even El Paso has been tested by the unprecedented situation along the U.S. southern border, where migrants have been arriving in greater numbers and from more countries than ever recorded.

A spike in migrant arrivals in El Paso this month has overwhelmed local resources and shelters, forcing hundreds of migrants to sleep on the city’s streets amid freezing temperatures and prompting its mayor to declare a state of emergency. The city has already repurposed hotels and homeless shelters to house migrants and is planning to convert a convention center and two vacant middle schools into temporary shelters.

The recent sharp increase in border crossings near El Paso is part of a broader regional migration crisis that has seen hundreds of thousands of people journey to the U.S. over the past two years to escape crushing poverty, joblessness, authoritarian rule and violence in countries throughout the Western Hemisphere.

The deteriorating economic and political conditions in many Latin American countries — coupled with expectations that U.S. border policies are more welcoming under President Biden, job opportunities in a tight American labor market and the desire to reunite with family members who already made the trek — have prompted migrants to find different ways to get to the U.S., even if it means risking their lives.

“It was very ugly and difficult,” said Erick Sandoval, 28, recounting his journey across Panama’s ungoverned Darién jungle, which he traversed with his wife and small children en route to the U.S. “They are the ones who suffer the most. Sometimes we didn’t eat. It also required long walks across the mud.”

So far in 2022, a record 228,000 migrants have crossed the Darién Gap, including 148,953 Venezuleans, 21,535 Ecuadoreans and 16,933 Haitians, Panamanian government data show. Arrivals of Venezuelans and Ecuadoreans there soared after the U.S. convinced Mexico to end visa-free travel for those nationalities.

Sandoval said his family left Ecuador over a month ago due to a rise in extortions and diminishing economic opportunities. He said his family was robbed in Guatemala and Mexico, where they had to sleep on the street for several days. After crossing the U.S. border, Sandoval’s family was processed and released with instructions to check in with immigration officials. The family was placed in a shelter in El Paso. Sandoval said they don’t have enough money to purchase a bus ticket to leave the Texas border city.

The trials of his family’s journey, Sandoval said, will all be worth it if he can find work and enroll his children in schools in Paterson, New Jersey, where his brother settled after crossing the southern border earlier this year. His wife, Nicole Conde, 24, said she understands why some Americans oppose helping migrants who enter the U.S. illegally, but she said they should empathize with their plight. Sandoval agreed.

“If we were doing well, there would be no need to migrate,” he said, carrying his 2-year-old daughter, Genesis. “If we could feed our children, why would we migrate?”

Like tens of thousands of Cubans have done over the past year, Yocarys, 33, flew to Nicaragua, which allows visa-free travel from Cuba, to begin the journey to the U.S. border. She said it was difficult to leave behind her 13-year-old son and 3-year-old daughter. But Yocarys said the dire economic situation on the communist-ruled island prevented her from securing basic necessities for her children.

“The desperation there is real,” Yocarys said as she waited for a 12:40 p.m. bus to take her from El Paso to Houston, where she hoped to take another bus to Florida. She hopes to find work there to send money back to her children in Cuba.

U.S. border officials have relied on a public health law known as Title 42 to manage the record migrant arrivals reported under Mr. Biden. The rule, first enacted by the Trump administration as an emergency measure to contain the coronavirus, allows the U.S. to expel migrants without giving them a chance to seek asylum.

Because of logistical and diplomatic obstacles, Title 42 generally only applies to migrants from Mexico, Guatemala, Honduras, El Salvador and more recently, to a limited number of Venezuelans, as those are the nationalities the Mexican government has agreed to accept in its territory.

That means most migrants from Cuba, Nicaragua, Venezuela and other countries beyond Mexico and Central America’s Northern Triangle are not expelled under Title 42 and generally allowed to seek asylum. Oftentimes, they’re released with a court notice or instructions to check-in with immigration officials at their destinations.

Title 42 could also end soon. The Supreme Court is currently weighing whether to allow a lower court ruling that invalidated the expulsions to take effect.

The Biden administration has asked the high court to allow officials to end Title 42 after Christmas, saying the policy can no longer be justified on public health grounds. But Republican-led states have urged the court to keep the measure in place indefinitely.

In El Paso, local officials have warned that Title 42’s termination will place even greater strains on the city’s shelter system and its ability to relocate migrants to other destinations, since the federal government would need to release additional migrants who are currently being expelled.

But the Biden administration said it plans to expand expedited deportations and prosecutions of certain migrants once Title 42 is lifted. It is also dispatching additional personnel to the southern border to respond to the expected sharp increase in migrant arrivals projected to occur after the expulsions are halted.

Moreover, Biden administration officials are considering enacting a regulation that would bar certain migrants from seeking asylum if they did not ask for protection in countries like Mexico before reaching the U.S., people familiar with the internal deliberations told CBS News.

That asylum restriction would likely be supplemented by the expansion of a process that has allowed some Venezuelans to enter the U.S. legally if they have financial sponsors here. Officials are considering expanding that process to include Cubans, Haitians and Nicaraguans.

Milton, 39, said he and his wife, Wendy, 35, joined the mass exodus from Nicaragua earlier this year because they struggled to feed their family. Milton blamed the repressive government of Daniel Ortega for the country’s economic woes.

“You don’t make enough money there to buy groceries,” Milton said, noting he had to leave his three children with family in Nicaragua because he could not afford to bring them along the multi-country trek to the U.S.

Milton and Wendy, who asked for their surnames to be omitted, were also waiting outside the El Paso bus station to board the 12:40 p.m. bus to Houston. They said their final destination was Florida, but they were not entirely sure how they would get there.

The couple’s objective is to make enough money in Florida to bring their 16, 13 and 9-year-old children to the U.S. They have an appointment to check in with immigration officials in two months. But because of the massive backlog of cases burdening the U.S. asylum system, they will likely not be able to apply for work permits available to asylum-seekers any time soon, forcing them to work under the table.

Still, Milton said he’s not sure he wants to live in the U.S. permanently.

“We don’t come here for luxury, but because it’s a necessity,” he said, adding that he would love to be able to go back to Nicaragua if the economic situation there improves.