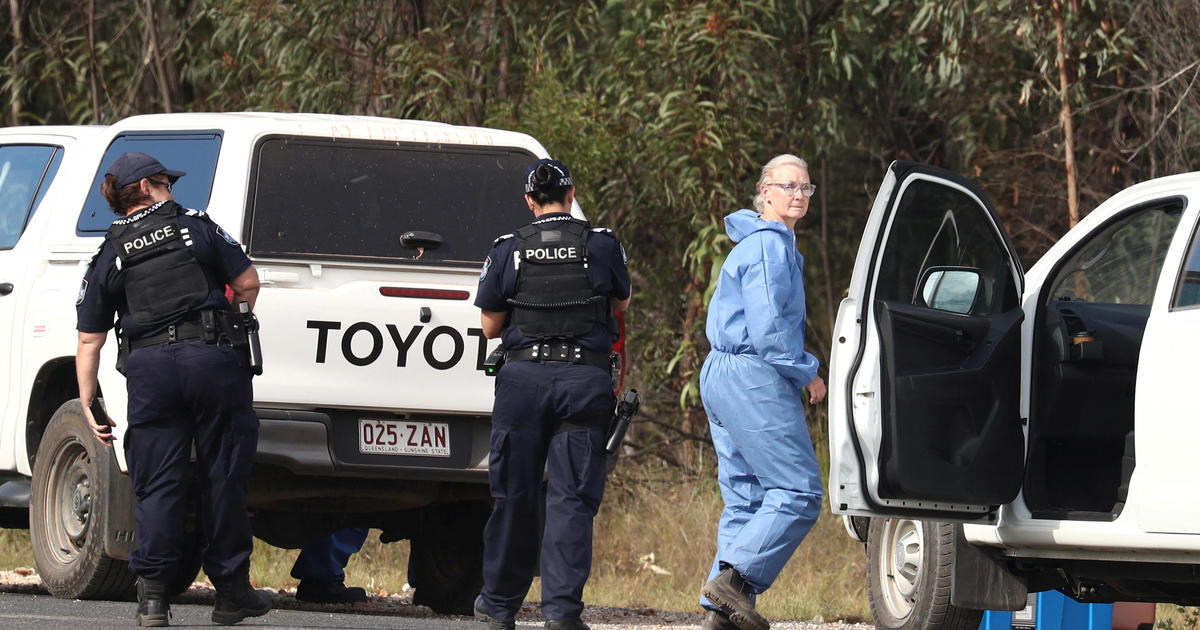 
Six people, including two young police officers, were shot and killed at a property in rural Australia after officers who arrived to investigate reports of a missing person were ambushed, authorities said Tuesday.

Police said the violence began about 4:45 p.m. Monday when four officers arrived at a remote property in Queensland state.

At least two heavily armed shooters opened fire on the officers at the rural property in Wieambilla, authorities said. Police returned fire but two officers were critically injured and died at the scene, and a neighbor was also killed during the firefight, police said.

In that initial confrontation, a third officer was grazed by a bullet while the fourth escaped, Queensland Police Commissioner Katarina Carroll said. She said it was a miracle that two officers had survived and that one was able to raise the alarm.

“In my view, the officers didn’t stand a chance, and I don’t know how two got out alive,” Carroll said after visiting the scene. She said the officers were shot in an exposed area in front of the house.

Police identified the officers who were killed as Constables Matthew Arnold, 26, and Rachel McCrow, 29. Arnold was sworn in as an officer in 2020 and McCrow in 2021.

Ian Leavers, the president of the Queensland Police Union, said the officers walked into a hail of gunshots.

“Two police officers were executed in cold blood,” he said.

He said that as one officer took cover in long grass, the offenders lit a fire to try and coax her out.

“She actually believed that she was either going to be shot or she was going to be burned alive,” Leavers told the Australian Broadcasting Corp.

Constable Keeley Brough sent frantic messages to loved ones as suspects tried to smoke her out of surrounding bushland where she hid, local media reported.

She has been a police officer for just eight weeks, officials said.

After the officer was able to raise the alarm, authorities said a siege situation then developed at the property, with specialized police officers and air support called in. Carroll said 16 officers risked their lives retrieving the bodies of the killed officers, not knowing at that point if their colleagues were dead or alive.

Just after 10:30 p.m., two men and a woman were killed in second major confrontation with police, bringing the violence to an end, police said. Carroll said all three of those killed were considered offenders.

The commissioner fought back tears as she spoke to media.

“It is an unimaginable tragedy,” Carroll said. “This has been incredibly distressing and tragic for everyone, particularly family, officers involved, colleagues, the organization and the community.”

She said it had been many years since there had been multiple police officers from the Queensland service killed during a single call out.

“To lose two officers in one incident is absolutely devastating,” she said.

Carroll said local police had acted upon a request from authorities in neighboring New South Wales state to check on a person who had been reported missing as long as 12 months ago, but who had been in contact with people until recent days.

She said the investigation was continuing and it was too early to say if police were lured to the property. She said the 58-year-old neighbor may have come over after seeing a fire at the property or hearing gunshots.

Carroll said the two killed officers were highly respected and much loved.

“They were both committed and courageous young people who had a passion for policing, and for serving their community,” Carroll said. “Both under 30 years of age. Both had wonderful careers and lives ahead of them.”

Prime Minister Anthony Albanese told reporters in Sydney that the country mourned with those affected.

“This is, indeed, a devastating day for everyone who loved these Australians, and our hearts go out to those in the grip of terrible grief,” he said. “We know that this news has fallen hard on a close-knit and caring Queensland community. As well as, of course, the community to which all police officers belong.”

He said officers across the nation know the risks they face, yet do their duty.

“And today and every day I pay tribute to each and every one of the police officers who serve their local communities and who serve their nation,” Albanese said. “This is not a price that anyone who puts on the uniform should ever pay.”

An emergency declaration remained in place Tuesday for the Wieambilla area and a crime scene had been established at the property. The area is sparsely populated and has several large properties and gas fields.

Queensland officials have ordered flags to be flown at half-staff at government buildings.

Gun violence is relatively rare in Australia, which implemented tough gun laws after a gunman killed 35 people in 1996 at a café in Port Arthur.